The First World War, also known as the Great War, saw the use of some of the deadliest weapons ever known to humankind. Europeans entered the war expecting traditional cavalry charges and infantry carrying bayonets, but the reality was very different when the continent woke up to face U-boats, machine guns, lethal chemicals and some of the most advanced artillery ever seen. Each side would come up with stronger and more advanced responses from century-old barbed wire to aircraft. It is believed that both warring sides had evaluated some 3,000 chemicals as weapons and about 50 of these were actually used on the battlefield. While many new developments were carried out, artillery remained one of the most prominent and devastating weapons of the First World War. Barbed wire was invented for livestock enclosures during the 19th century, and eventually found its way into modern warfare during the First World War. It has been estimated that a million miles of barbed wire were installed in Flanders alone that could circle the earth 40 times. This wire proved to be a lethal weapon during the war. Wire was laid out to defend trenches and mark no man’s land, and was also used by soldiers to lure an enemy into slaughter zones filled with artillery target points and machine guns.

The wire was typically laid out in long zigzag strips or belts running parallel to the trenches. They were often several rows and dozens of feet deep. Wire fields, particularly on Germany’s densely fortified Hindenburg Line stretched as far as 300 feet (91 meters) out into no man’s land making it dark and dense even during daylight. 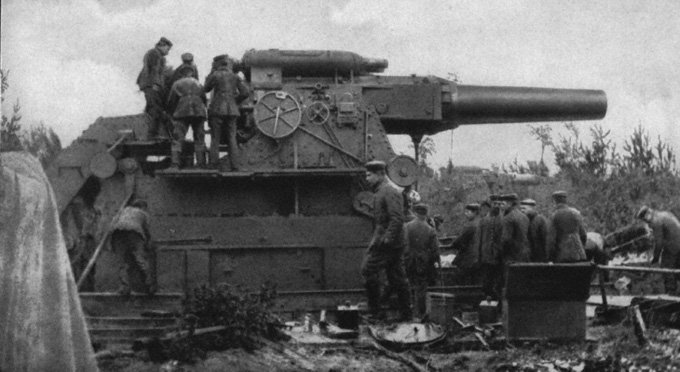 At the time of its creation, Big Bertha was the largest and most powerful piece of mobile artillery used by any army. It was a 420mm (16.5in) howitzer used by the German forces to advance through Belgium during 1914. At the start of the war, the German forces had two Big Berthas and a total of 12 came into service during the war. The gun could fire projectiles weighing up to 1,785 pounds to a distance of about nine kilometers (six miles). The most widely used type of shell in Big Berthas included a delayed-action fuse which exploded after penetrating up to 40 feet of concrete and earth.

The name Big Bertha was given to the artillery piece in honor of Bertha Krupp von Bohlen und Halbach, owner of the Krupp firm which made the weapon. During the Siege of Liège, Belgium, one of its projectiles completely destroyed the Fort de Loncin, demonstrating the huge capacity of Big Bertha. 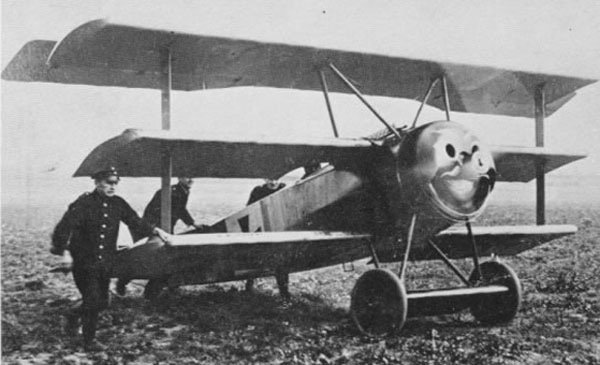 The Fokker Triplane is the most famous airplane of the First World War and was the German response to the famous British Sopwith Triplane. It was flown by the most famous German ace Manfred Albrecht Freiherr von Richthofen, also known as the Red Baron, who downed at least 70 allied pilots, and 19 with his Dr.1. Despite its popularity, only 320 of the Fokker Dr.1 were produced. Some of the aces that flew the Dr.1 included Werner Voss with 48 victories, Kurt Wolff with 33 victories, and Lothar von Richthofen with 40 victories.

The top wing of the Fokker D.VI Triplane had ailerons and the lower and middle wings were attached to the fuselage. The top wing was above the fuselage and was attached by steel tube struts. Powered by a 110hp engine, the D.VI was armed with two synchronized 0.31-inch LMG 08/15 guns.

The First World War saw many developments in weapons like bomber aircraft, and automatic and portable machine guns, but it was dominated by artillery pieces. Their main aim was to fire explosive-filled projectiles over large distances. Unlike infantry and cavalry, the artillery could not enter into combat independently on its own. The two main types of artillery used in war were light field artillery pulled by horses and heavier guns moved by tractors.

After 1914, field artillery mainly had cannons with flat trajectories that had calibers ranging from 7.5 to 8.4cm. Heavy artillery also included heavy mortar fire and special guns with calibers of over 30cm that were used for combat against modern armored turret fortifications. The use of artillery increased during wartime and its number was high by the end of the war. In 1914, artillery men made up 20 percent of the French army, and by 1918 the number was up to 38 percent. Most deaths in the war were caused by artillery, which is estimated to be about two-thirds of all deaths. 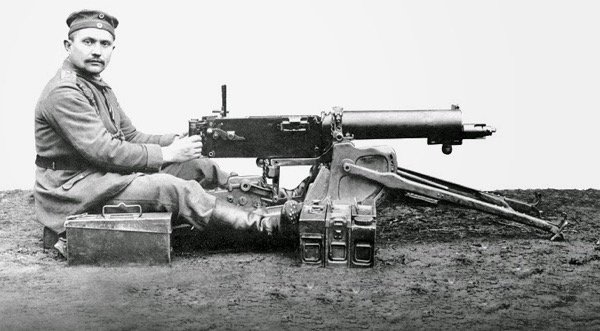 The Maxim MG 08 or Maschinengewehr 08 was an adaptation of the original machine gun, the world’s first fully automated machine gun system developed by Sir Hiram S. Maxim in 1884. The German army made a direct copy and deployed it during the First World War. During the Battle of the Somme on July 1, 1916, on just one day the British lost 21,000 men mostly to the German version of the machine gun. The MG 08 variant was used throughout the war and even during the Second World War.

The firing rate of the weapon depended on the lock assembly used and averaged 500 rounds per minute for the Schloss 08 and 600 rounds per minute for the Schloss 16. The gun used 250-round fabric belts of 7.92×57mm ammunition. Because sustained firing would lead to overheating it was water-cooled using a jacket around the barrel that held approximately one gallon of water. The practical range of the MG 08 was estimated at some 2,200 yards up to an extreme range of 4,000 yards.

Chlorarsine is one of a group of chemical weapons classified as a vomiting agent or sneezing gas. It caused short-term but intense respiratory distress which was designed to temporarily disable and terrify the enemy troops.

The Germans used the first mustard gas in 1917. After encountering several attacks from the gas, the Allies named it Hot Stuff or H.S. or simply H by the end of the war. Mustard gas or sulfur mustard caused large blisters on the skin and lungs. Mustard gas could not be easily detected unless under a direct attack. Soldiers often detected it from its unusual smell, but gas masks often proved inadequate as the gas penetrated the filters and mask housing.

Gas shells including chlorarsine, mustard gas, and also phosgene caused about 160,526 casualties and about 4,000 deaths among British troops. 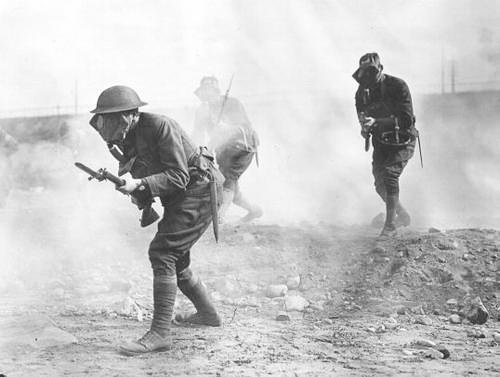 Chemical warfare during the First World War included different types of chemicals. The French were the first to use them in combat against the Germans in August 1914. While the precise chemical is not known, both xylyl bromide and ethyl bromoacetate have been mentioned. Tear gases were not designed to kill but rather render the enemy unable to defend its position. Tear gas also opened the door to more lethal chemicals like chlorine. Tear gas affected the eyes and lungs but the effect was cleared within 30 minutes of exposure.

Phosgene was the next chemical that was used alongside chlorine. It could take about 48 hours for the symptoms to appear. It caused a build-up of fluid in the lungs which resulted in death. It is estimated that as many as 85 percent of the 91,000 deaths attributed to gas during wartime were the result of phosgene or the similar agent diphosgene. Poisonous gases caused more psychological trauma than deaths. About 1 percent of wartime fatalities and 7 percent of casualties were the result of poison gases.

The Mark V tank was the last and largest tank to serve in the First World War on the British side. It was a modified version of the Mark IV. Together with its variants the Mark V* and Mark V** about 1,070 were built by March 1919. The Mark V had the external features of the Mark IV including the hull, rollers, and tracks to avoid disruption of production. However, a new, more powerful drivetrain and transmission were produced in early 1917. These systems included petrol-electric schemes, hydraulic systems, a multiple clutch system (a single driver was needed), and Wilson’s own epicyclical gearbox design (four forward gears, one reverse). A new and more powerful 19-liter six-cylinder in-line Ricardo engine (150bhp) was also fitted. Autonomy of the Mark V was 70km (45 miles) with a 450-liter fuel capacity (93 gallons), which was enough for about 10 hours on rugged terrain.

The Mark V made its combat debut at the Battle of Hamel on July 4, 1918 where it successfully supported Australian troops in action. This rebuilt the Australians’ confidence in tanks which had been badly damaged earlier at Bullecourt. Before the end of the war, the Mark V was used in eight major combats. Since the Mark V was available only during 1918 its overall effect on the war remained insignificant.

Airships or dirigible balloons are types of aerostat or lighter-than-air aircrafts that can navigate through air under their own power. These types of aerostat aircraft gain their lift from large gas bags which are filled with lifting gas which is less dense than the surrounding air. Airships had been used before the start of the war, but it was during the war that the airship debuted as an air weapon.

The Zeppelin was one of the first airships to be used in the war. It was created by Count von Zeppelin, a retired German army officer. During the initial days of the war, the Germans used Zeppelins filled with hydrogen, capable of traveling at about 85mph and carrying up to two tonnes of bombs. Raids on England began during January 1915, and the Germans believed that their airship was an ideal weapon against the superiority of the British navy. The Germans used it at the beginning to damage British morale but as the war progressed, the damage caused by airships was insignificant and the deaths amounted to a few hundred. The development of newer weapons like ammunition made airships vulnerable due to the flammable hydrogen that powered them.

The Type 93 U-boat was one of the most lethal weapons used during the First World War by the Imperial German Navy. The name “U-boat” came from the word Unterseeboot which means “undersea boat” in German, but it was used mostly by the English to refer to German military submarines. The Type 93 was built by the German Imperial Navy. Type 93 U-boats carried 16 torpedoes and had arrangements of deck guns. Some of the Type 81 and 87 had only one 8.8cm (3.5in) deck gun while others had a single 10.5cm (4.1in) gun with 140 rounds; some were equipped with both at the initial stage. In 1917, some of the boats were refitted with a single 10.5cm gun and 220 rounds.

These boats had a crew capacity of 39 members and had excellent seagoing capabilities with a cruising range of around 17,000km (or 9,000 nautical miles). The Type 93 boats were responsible for sinking about 3 percent of all Allied shipping sunk during the war, which was about 411,304 gross register tons (GRT). They also managed to damage 70,913 GRT and capture 235 GRT.

These weapons of the First World War not only caused deaths and casualties but also created psychological terror amongst troops and civilians. Gas attacks would often cause trauma where the soldiers would remove their safety gear in a wave of panic. Technological advancements changed the face of war and civilians were killed in air raids for the first time. Old tactics and strategies were rendered less important as new methods were developed. Both warring sides were equally powerful which accelerated the development of lethal weapons, new ways of spreading terror, and new ways of killing people faster than ever, resulting in one of the highest death counts in history.