The Second World War is considered as the most widespread and terrifying war in the history of mankind. There were more than 100 million people from over 30 countries directly or indirectly involved and over 60 million casualties. One of the major reasons for such mass destruction was the advanced weaponry used. During World War II, the focus was placed on innovation, technology, communication, and medicine to gain the upper hand. The Allies eventually achieved victory in this most destructive war, and it ended with the collapse of the Nazis and the fall of the Japanese and Italian empires. Hundreds of massive weapons were manufactured by the United States, Germany, Great Britain, Japan, the USSR, and other countries. Among them, the atom bomb is perhaps the most well-remembered weapon, the effects of which were felt decades after the end of the war. Here is a list of the 10 deadliest weapons of World War II: 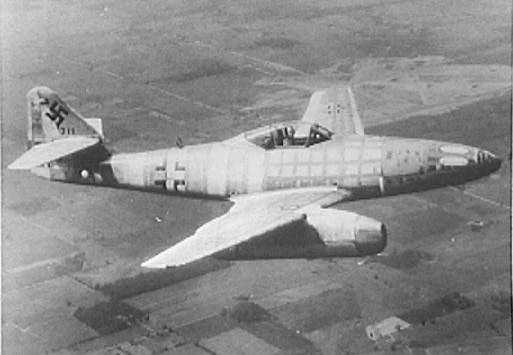 The Messerschmitt Me 262 was the world’s first jet-powered fighter aircraft. It was manufactured by Germany during the Second World War. The aircraft was the German effort to turn around the war in 1945. It was called Schwalbe, German for “swallow” in fighter versions and Sturmvogel, German for “storm bird” in higher bomber versions. The Me 262 was more heavily armed than any other Allied fighter, surpassing the British jet-powered Gloster Meteor. 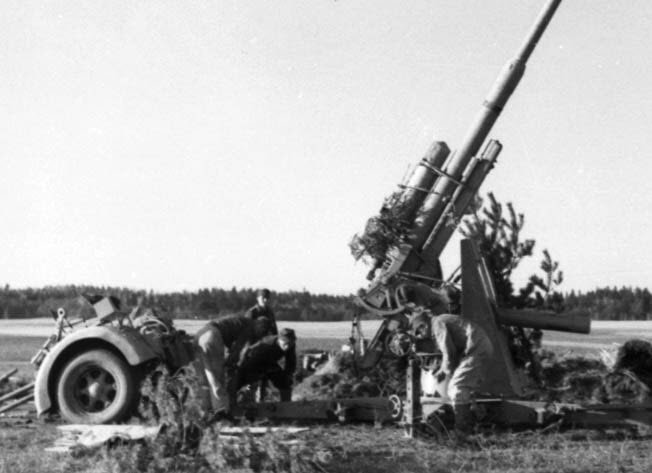 The 8.8cm Flak 18/36/37/41 commonly known as the 88 or the Acht-acht was an 88mm anti-aircraft and anti-tank artillery gun used during the Second World War by the Germans. It was one of the most feared artillery pieces with the Germans using it widely from North Africa to the Russian front. The 88 was originally positioned as an aircraft defense weapon. The term “flak” is a short form of the German word Flugzeugabwehrkanone meaning “aircraft-defense cannon.” Later on, “flak” in English became a generic term for ground anti-aircraft fire.

During Operation Battleaxe the 88 cost the British about 90 tanks and almost 1,000 men, raising the morale of the German side. The models of the early 88mm guns were 56 calibers long, meaning the barrel length was 56 times its diameter. The standard gun could fire a 17-pound grenade climbing thousands of feet into the air and bursting into 1,500 or more shards which could cause damage anywhere within 200 yards. The 88 earned its reputation as the best overall gun of the war and was feared by Allied airmen, tankers, and soldiers because of its accuracy, lethality, and versatility.

The Mk 2 grenade was manufactured by the USA and was the standard US Army Infantry hand grenade from 1918 until the 1960s. It was used throughout the Second World War. The Mk 2 was also known as the “pineapple” for its patterned, grooved metal body, and the “frag” grenade. The original Mk 2 had a 3/8-inch thread plus its base which covered the opening used to fill it with explosives.

Mk 2 grenades, which were high explosives, were filled with smokeless EC powder which produced an adequate amount of fragmentation and did not require a detonator. The Mk 2 used flaked or granular TNT. The early variants of the Mk 2, the M5, M6 and M10, used fuses. These fuses gave a loud bang and produced sparks when activated. During the Second World War the grenade could also be equipped with stabilizer fins along with a tube body for firing from the muzzle of service rifles that had an M7 adaptor. 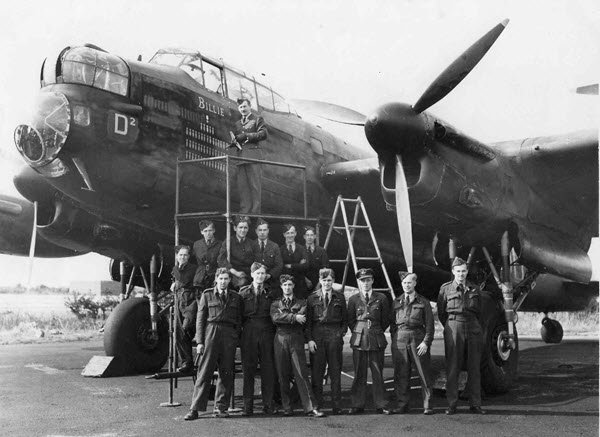 The Avro Lancaster was a British four-engine heavy bomber. The aircraft was built by Avro for the Royal Air Force (RAF). It went on to become the most important British heavy bomber during the Second World War. The prototype of the Lancaster was first flown in January 1941. The Avro Lancaster was born out of earlier failed designs of the Avro Manchester bomber. The aircraft was used on many bombing raids in Germany, including the so-called “1,000 bomber raid” on Cologne. A well-known Lancaster bombing raid came in the 1943 mission codenamed Operation Chastise, which was to destroy the dams of the Ruhr Valley.

The Lancaster was heavily armed with eight 0.303 machine guns in various turrets on board. As war progressed, the bomb bay in the plane was modified to allow bigger bombs such as the “Grand Slam” which at 22,000lbs (9,979kg) was the heaviest bomb carried during the Second World War. During wartime, the Lancasters flew over 156,000 sorties (offensive attacks) and dropped 608,000 tons of high explosive bombs and 51 million incendiary bombs. Only 35 Lancasters completed more than 100 successful operations each and about 3,249 were lost in action. 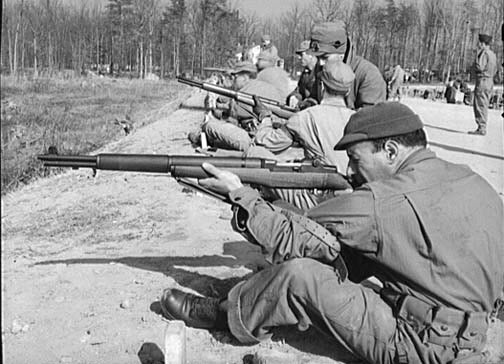 The M1 Garand rifle is a 0.30-caliber semi-automatic rifle that was used by the US as their standard rifle during the Second World War and the Korean War. The Garand is still in use by drill teams and military honor guards. During its time, it was the first standard-issue semi-automatic military rifle. In fact, the US was the only country to have equipped its troops with an auto-loading rifle as the standard infantry weapon during the war. It gave US troops the upper hand in firepower, and was called “the greatest battle implement ever derived” by General George Patton.

M1 rifles were widely issued to US forces but many hundreds of thousands were also provided to their allies as foreign aid. They were used by all branches of the United States military. The M1 rifle gained priority after the Pearl Harbor attack by the Japanese in December 1941. Manufacturers Springfield and Winchester operated at full speed to produce more than four million M1 rifles by the end of the war in 1945. The M1 served with distinction. 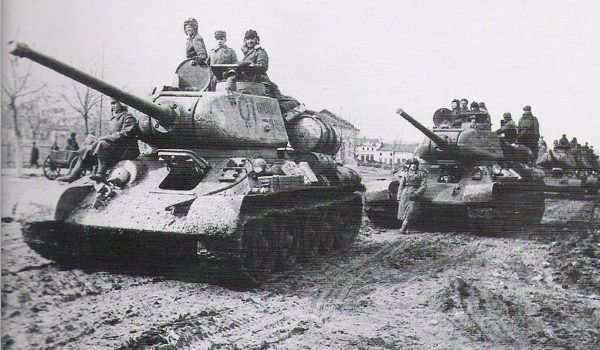 The T-34 tank was a Soviet medium tank which was used during the Second World War. It had a profound and lasting effect on the field of tank design, even though its armaments and amours were surpassed later during the war. It has been credited as being one of the most effective, efficient, and influential tank designs. The T-34, during its initial introductory phase, had an unprecedented combination of firepower, mobility, protection, and ruggedness.

The initial T-34 had a powerful 76.2mm high velocity tank gun, which provided substantial increase in firepower. It was difficult for contemporary anti-tank weapons to penetrate its heavy, sloped armor. During 1944, a second major version of the T-34 was used, which was the T-34-85 with a larger 85mm gun in order to deal with newer German tanks. The Soviets produced about 80,000 T-34s as the war progressed despite losing thousands in combat against the German Wehrmacht (the unified armed forces of Nazi Germany from 1935 to 1946). It was the most produced tank of the Second World War and the second most produced tank of all time behind its successor the T-54/55 series.

Designed by Nazi Germany, the Maschinengewehr 42 or MG 42 was a 7.92×57mm Mauser general purpose machine gun. The MG 42 was a streamlined version of the earlier MG 34. The weapon’s most notable features included its exceptionally high rate of firing at about 1,200 to 1,500 rounds per minute which was twice the rate of the Vickers and Browning machine guns. The MG 42 had a 1,000-meter range and a capacity of 50 rounds. The American GIs called the weapon “Hitler’s buzz saw” while the Soviet Red Army called it “the linoleum ripper” as it produced a unique tearing sound due to its extremely high rate of fire.

It was used extensively by the Wehrmacht and the Waffen-SS (the armed wing of the Nazi party’s SS organization) during the second half of the Second World War. It was used all across the battlefields of Europe and caused thousands of Allied deaths. The weapon was much loved by its users and respected by the Allied forces who faced it. By the end of the war, about 408,323 MG 42s had been produced.

Built by the Soviet Union in the Second World War, the Katyusha rocket launcher was a type of rocket artillery with multiple rocket launchers attached to the back of a vehicle to provide it with mobility. They were used throughout the war and were famous for their powerful punch. They were available for a fraction of the price of the artillery gun and could bring down enemy troops in a matter of seconds. The sound of the launcher also caused psychological terror and was named “Stalin’s organ.”

It had a 5kg high explosive warhead and was attached on the vehicle designated as the BM-13. The rockets had a range of 8.5km and the explosive fragmentation radius upon impact was over 10m. The launchers were less accurate than artillery guns but were effective in saturation bombardment which was most feared by the German troops. Over 10,000 Katyusha launchers were produced by the end of the war along with 12 million rockets.

The Hawker Hurricane was the British single-seat fighter aircraft that was built by Hawker Aircraft for the RAF. It was one of the greatest fighter planes of the Second World War. It could reach a maximum speed of 340mph and had a range of 468 miles with a ceiling of 35,000 feet. Armaments in the Hurricane included eight 0.303 machine guns.

Over 14,583 Hurricanes were built including a later version named the Sea Hurricane. The Hawker Hurricane is well remembered for the Battle of Britain in 1940 when the RAF defended Great Britain against the German Air Force resulting in a major campaign fought entirely in the air. The Hawker accounted for over 60 percent of the RAF’s air victories during the Battle of Britain and halted Hitler’s advancement in Europe. It was used widely in major battle areas during the war like the jungles of the Far East and the deserts of North Africa. 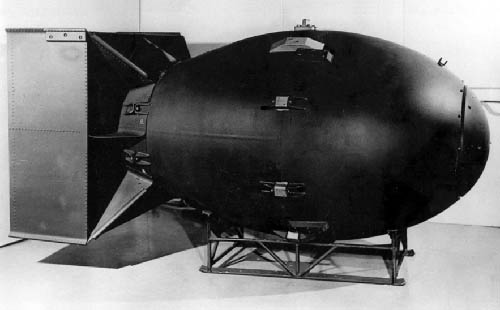 The atom bomb is perhaps the most well-remembered weapon from the Second World War, whose effects lasted several decades after its use and the end of war. On August 6, 1945, “Little Boy,” the codename for the first atom bomb to be dropped over Japan, was detonated over the city of Hiroshima. The bomb exploded with an energy of approximately 15 kilotons of TNT which caused significant damage to the city. Three days later, the second atomic bomb, codenamed “Fat Man” was detonated over Nagasaki on August 9, 1945 which was even more powerful than the first bomb, exploding with an energy of 21 kilotons of TNT.

The detonation of these bombs made the USA the first and only country to use atomic bombs against another country. Over 66,000 people were killed as a direct result of the blast in Hiroshima with over 69,000 casualties. Among the dead, 20,000 were from the Imperial Japanese Army. The total number of deaths reached over 192,000 including the after effects of radiation. Over 70,000 people were killed instantly in Nagasaki. Five days after the second detonation, Japan surrendered, ending the deadliest war in history.

See also:
The 10 Bloodiest Battles of World War I

Over 60 million people were killed during the deadly years of the Second World War, making it the most lethal and devastating war in human history. The death toll was about 3 percent of the total world population in 1940. Such a huge loss resulted largely from the advanced technology that accelerated the pace of human loss and damage to infrastructure on both sides. After the detonation of the first atom bomb in combat, the world was opened up to nuclear warfare and the debate has been raged ever since.