The ancient Roman legions played a key role in the rapid expansion of contemporary Roman civilization. The average Roman soldier was trained to fight in a formation of about 5,000 fellow warriors, each group forming a Roman legion. Their disciplined fighting tactics played a crucial role in crushing their opponents in battles. It also helped that the Roman infantry came equipped with an armory that allowed for quick offenses and provided a solid defense. Ironically, however, the standards and discipline of ancient Roman military tactics were absent in their military armor and attire. Here is a list of the top 10 ancient Roman pieces of armor and costumes: 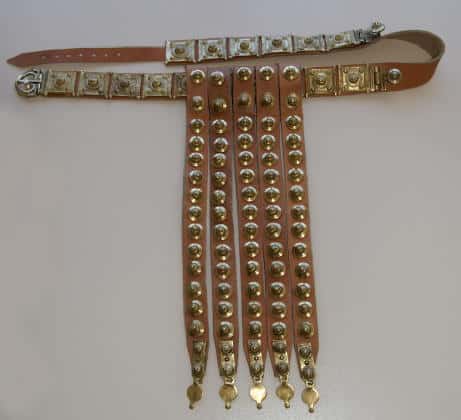 The ancient Romans called this belt the balteus. A typical military belt was worn over the shoulder and reached down to the opposite hip. The Roman legions typically used the balteus to hang their sword or any other relevant piece of military equipment on. These belts were mass produced from leather and high-ranking military Romans preferred their baltei to be decorated with valuable gems, stones, and metals.

In the Roman ranks, a single belt to support a dagger and the bearer’s tunic took over from the tradition of two crossed belts popularly worn during the Augustan era. Often, the single belt was embellished with narrow or wide belt plates. These plates were made up of cast brass with a shiny tin or silver finish stamped into them. One style of belt was always rolled and, on occasions, had ball-headed pins attached to it. 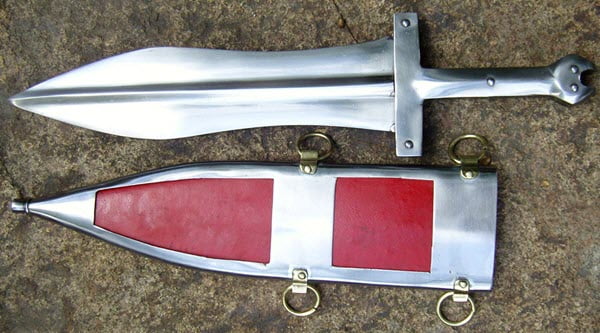 The Roman legions used different kinds of swords of varying shapes and sizes. The smallest one among these was called the pugio. These Roman daggers were pretty handy when they had to fight enemies in very close proximity. Usually the most preferred sidearm, the daggers were equipped with large, leaf-shaped blades 7-11 inches (18–28cm) in length and around 2 inches (5cm) in width. Next in line is the Roman gladius which is the Latin word for sword. In comparison to other medieval swords, these were rather short – a typical gladius was only 18–24 inches (45-61cm) long. The earliest gladii were succeeded by subsequent, more efficient designs. The most popular of these improved swords were the Mainz gladius and the Pompeii gladius.

Then there were the long swords preferred by soldiers during the middle and late periods of the Roman Empire. These were called the spatha and were popular with the Roman cavalry during first century AD. Soon, the Roman legions also followed suit and switched to spatha around the second to third century AD. This switch also coincided with the Roman military now favoring spears in place of heavier javelins in battles.

Until around the second century BC, the tunic had yet to appear on the scene as a general piece of clothing. Until that time, the toga was worn by Romans of both genders, a tradition the Romans had taken over from their Greek predecessors. It was around the early third century that the tunic started to gain more popularity as it was far more comfortable and practical. In the years that followed, almost all Romans wore it on a regular basis. People with a higher status in Roman society would wear longer tunics, often decorated with stripes and ornaments to reflect their wealth.

In the military, a shirt-like tunic made from a piece of rectangular cloth was worn. This was made from wool, cotton, or linen depending on the climate. In the beginning, military tunics were sleeveless, but later full sleeves were added. Close attention was paid to the length of the tunic so as to make it suitable for the wearer’s rank. A typical Roman soldier’s tunic was an off-white color or dyed red with madder. 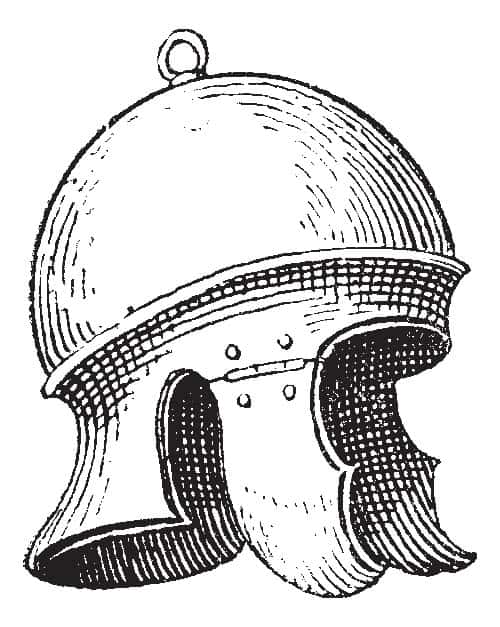 The helmet, or the galea, was a crucial part of ancient Roman armory. A Roman soldier would wear it to protect his head from attack on the battlefield. Even some gladiators and myrmillones have been documented to have worn bronze helmets with face masks during gladiator fights. Different units of Roman legions and cavalry wore different shaped and styled helmets. Since all pre-industrial era helmets were handmade, it is rather unclear if the Roman Empire placed certain standards on the galea’s design and shape.

The helmets also had crest holders. These were either centrally mounted plumes or U-shaped removable holders attached to the back of the helmet. Apart from serving as eye-catching helmet decorations, these crests, especially when they incorporated emblems, also acted as identification for different infantry units. But again, unnecessary helmet decoration clearly wasn’t favored during battles and wars. This is also evident from ancient Roman sculpture and art which shows that such decorations were mostly used during parades or festivals. 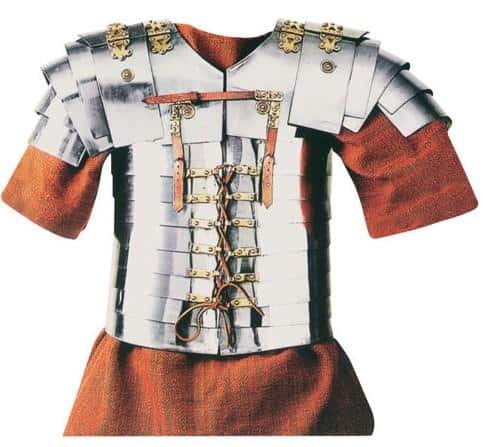 The segmented armor, also known as lorica segmentata was used by Roman soldiers as a type of personal armor. It was made up of metal strips or hoops cast into oval bands and then attached with leather straps for proper fastening. The metal strips had soft iron on the inside and a certain proportion of steel on the outside.

Sculptures on the Column of Trajan depict various legionaries wearing the segmented armor. Based on this evidence, it had been interpreted that this armor was donned by the legions only. But many historians also state that the depictions on the Column of Trajan stylized the Roman armor making the portrayals rather inaccurate. Many consider these engravings as artists’ impressions and not historically accurate representations. Eventually, the use of segmented armor ceased in ancient Rome, the main reason being its costlier manufacture and tedious maintenance. 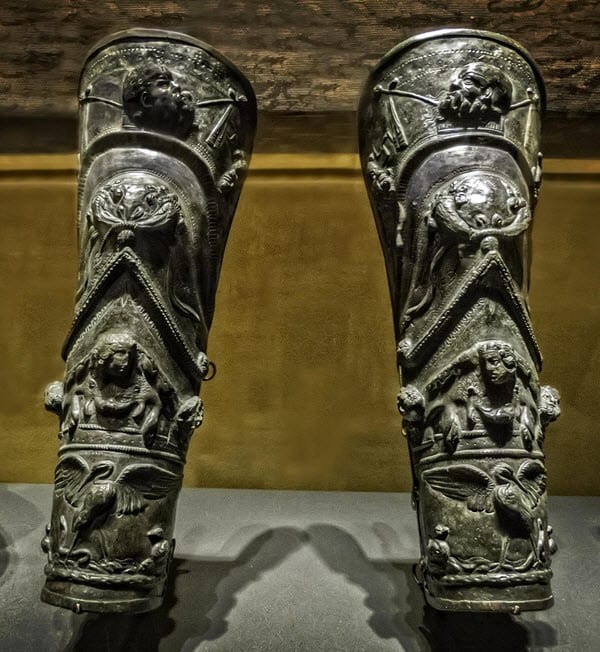 Greaves were used as protective leg armor by Roman officers (optio and up). The most frequently used greaves were made from bronze and were also called ocreae. This leg armor primarily protected the wearer’s vulnerable tibia bone from sword or dagger attacks. The bone is covered by a very thin layer of skin which, if not properly guarded, is prone to injuries. The Romans knew very well that a good jab to the shin could gravely injure their soldiers and render them useless in battle.

This is where the greaves came in as a vital protective layer for the tibia and shin. They had a metal exterior and were padded with a softer interior for a comfortable fit on the bearer’s leg. The extra padding also helped to absorb shock from incoming blows to the armor, thus reducing the chances of damaging the shin. Interestingly, during Caesar’s reign, soldiers were required to wear only one greave. They were provided with a four-foot shield to cover the other leg.

Also called chain mail, this type of armor is made up of small metal rings meshed together in a pattern to make a strong protective layer. When the Romans saw the Gauls using this armor during the days of the Roman Republic, they decided to incorporate it into their own ranks in the form of lorica hamata. During the imperial Roman era, this Roman iteration of mail armor became the primary protective clothing among the legions. Each complete piece of lorica hamata consisted of small iron rings, each ring interconnected with at least two other rings right above or below it.

The chain-mail structure was adequate protection against possible cuts from slashing blades. It also warded off lethal penetration from spears and arrows. On the downside, it could not absorb the massive shocks dealt by powerful blows through its rather thin ring layering. Such massive trauma inflicted from bludgeoning attacks led to severe injury. A well-placed spear could easily crack ribs or dislocate collar bones. In later iterations, the mail armor was padded with soft garments to protect the wearer from shock. 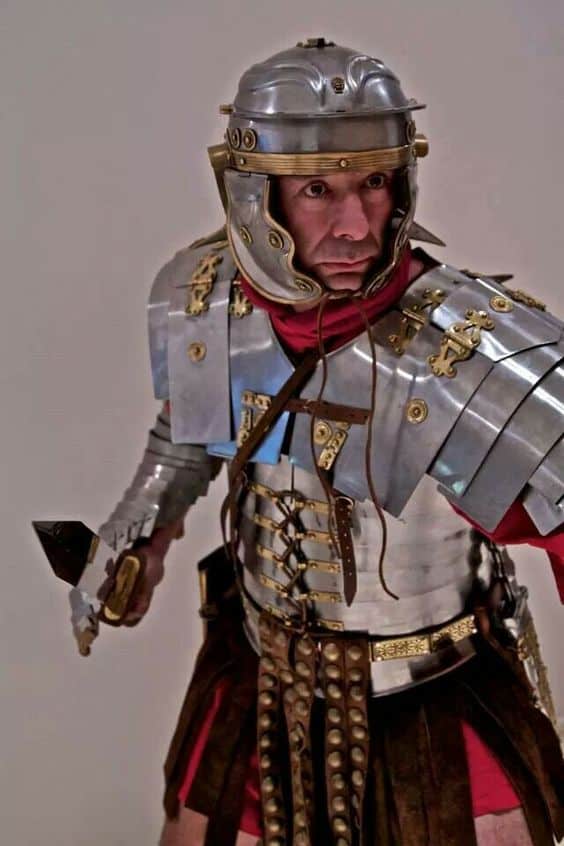 Arm guards were quite popular among Roman gladiators in the early years. They were made from iron or bronze and were fitted with curved or overlapping plates of metal. Leather straps were used to fasten them to the wearer’s arms. Known back then as lorica manica, they were regularly worn by a group of gladiators known as the crupellarii. It was only much later that Roman soldiers saw their efficiency in warding off blade cuts to arms.

Historians found that a typical manica would include a shoulder plate, a number of metal strips, and an additional 90 leather strips for tight and comfortable fastening. It was then given an inner padding so that it could absorb shocks from powerful spear attacks. Perhaps the biggest evidence of the growing popularity of arm guards among Roman soldiers can be seen in the tombstones of Sextus Valerus Severus and Gaius Annius Salutus. The presence of manicae as a part of the decoration in their tombs along with other weaponry further cements the fact that arm guards had become an integral part of Roman armor at that point. 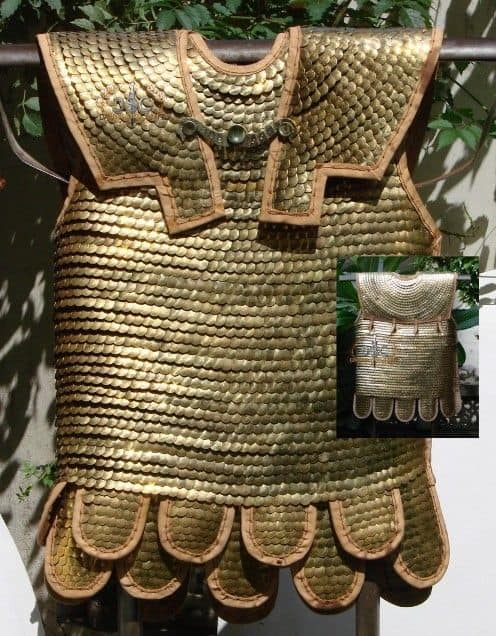 Lorica squamata was the name given to scaled armor popularly donned by centurions, cavalry troops, infantry, and even legionaries in ancient Rome. This armor consisted of small metal scales sewn with a fabric backing. Structurally and dimension-wise, it was similar to the standard mail armor. It reached the bearer’s mid-thighs and the shoulders were fitted with capes. For ease of use, it is possible that the armor was done up at the back or down one side. The openings were then closed using comfortable knots.

Each scale armor was constructed from individual scales called squama. The soldiers favored scale armor over mail armor since it provided a better defense against bludgeoning. But again, scale armor has also been documented to be vulnerable to attacks that included a quick upward thrust. Perhaps this vulnerability was much exaggerated as scale armor was extensively used beyond the Roman Empire especially in Persia and Byzantium. 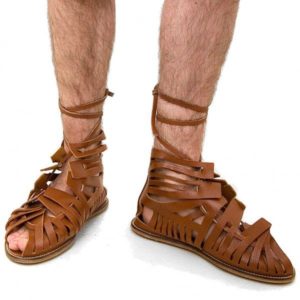 Caligae are the legendary military shoes worn by ancient Roman legions and the cavalry. The caligae were heavy-soled boots extensively used by the troops of ancient Rome throughout the republican and imperial eras. These shoes have become truly symbolic of the rise of the Roman Empire with the marching cavalry expanding its borders far and wide.

The caligae were strikingly different from today’s military boots. Air could pass freely to the bearer’s feet and they were particularly good at reducing the chances of getting blisters from non-stop marching. It also helped that chronic foot disabilities such as tinea and trench foot were curbed by regular use of these shoes. Caligae were most common among soldiers up to the rank of centurion as they did most of the marching. Similarly, horsemen wore specially designed equestris, and fighters wore shoes fitted with iron nails beneath the sole for better traction on the battlefield. The shoe was also bound by a strip of soft leather right around the shin, and the toes were always left bare.

When the Romans took over from the Greeks, their empire stretched far beyond previous known boundaries. The elegance and grace of the Greeks gave way to new Roman styles. They created new armor which was suited to the rough weather and terrain of the countries they were conquering. Their armies had to march a long way, so they came up with the caligae. They had to battle against tough adversaries like the barbarians, so they devised armor that provided the best offense and defense in contemporary times. It was their pragmatic yet realistic approach that took the Roman civilization to such great heights.