Military tactics have constantly evolved throughout history, but it was the Romans who contributed the most to progressive technologies and analytical military tactics.

The Roman military was adaptable, and its approach to battle was quite different from other war units. This special ability of the Romans set them apart

. They not only created their own tactics but also made use of existing tactics and weapons, modifying them for their own ends.

Their success on the battlefield is proof of their innovative and tactical techniques, which were not only efficient but also effective. Ever wondered how? Here are 12 of their most innovative developments:

Contents show
1. The Triple Line
2. Medical Treatment on the Battlefield
3. The Corvus
4. Greek Fire
5. The Wedge
6. The Testudo
7. The Carroballista
8. The Onager
9. The Pilum
10. The Plumbata
11. The Pontoon Bridge
12. Highways and Roads
Conclusion

This was a Greek-style phalanx which the Romans adapted. Formations were made based on military rank. The lines consisted of the least experienced men, the hastate, at the front followed by the principles and then the triarii, or the most experienced soldiers. In front of all of them were the velites, the newest and poorest recruits, whose job it was to attack the approaching enemy with javelins.

The three lines could often stretch for more than a mile. There were some gaps in the line, but mostly it presented one long, unbroken front. The gaps between the ranks allowed the rear line to step forward during battle if necessary.

2. Medical Treatment on the Battlefield

The Romans were well known for their structured organization which set them apart from their enemies, but they suffered casualties just like everyone else. The Romans had highly trained experts at their disposal who were employed to take care of logistics and casualties. They were made up of engineers, doctors, and even architects, who worked together to ensure the army was tactically and physically strong.

The Roman military had a dedicated unit of medical professionals along with a surgery unit which treated injured soldiers on the battlefield. These professionals were trained to do everything such as making sure the instruments used for surgery were clean.

They used to disinfect the instruments with hot water before using them, a technique which was used up until the 19th century. In addition to this, their job was to ensure the sanitation of the army camps to prevent the spread of infection. They also made sure that soldiers had a good diet, which is probably why Roman soldiers – or at least those who survived the battlefield – lived a longer life than civilians during that era. 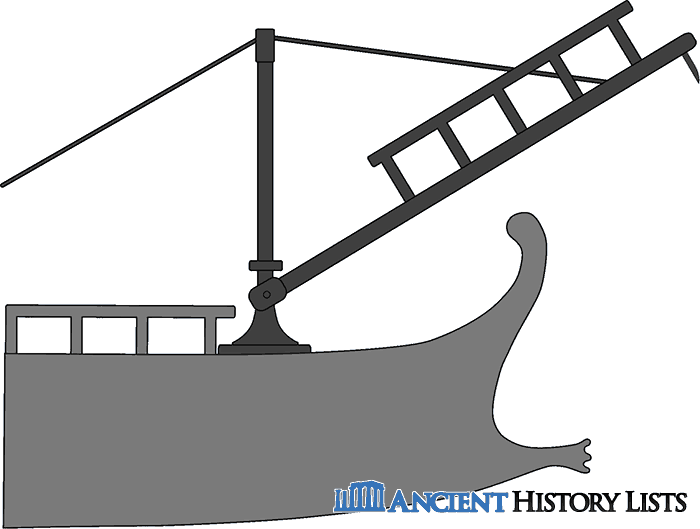 The First Punic War was fought between Rome and Carthage from 264 to 241 BC when the Romans were considered newcomers in the Mediterranean. The Romans won the war with the help of their engineers who led the army to victory in what might have been the largest naval battle of its time.

The Roman army came up with a new mechanism called the corvus which means “crow” in Latin. The corvus was a boarding device used to access enemy ships. There were heavy spikes on its tip that could be used to cling on to the deck. This tactic gave the Romans an advantage in battle over the more experienced Carthaginians.

This was another tactical weapon developed by the Romans in the seventh century AD. This controversial weapon was thought to have been created by the Syrian engineer Callinicus, and it used a vicious “liquid fire” which could burn when it was floating on water.

It employed a combustible compound which was given off by the weapon and used to set fire to enemy ships. The most significant feature of it was that it ignited on contact with water, and it significantly helped the Romans during their naval battles, especially those fought by the Eastern Roman Empire.

A few contemporary writers describe how Greek fire could be efficiently combatted using sand and strong vinegar, but the process of making Greek fire remained a closely guarded military secret.

A “flying wedge” or “flying V” is a cluster created by bodies moving forward in a triangular formation. This V-shaped arrangement was successfully used as a military strategy by the Romans because it is easier to turn in this formation than in a square one. In case of emergency, the turns can be made comparatively quickly as everyone follows the leader at the apex. The point, or the center of the wedge, was made up of lines of the best troops available.

The effectiveness of the wedge formation was clearly seen when it was successfully used against Alexander the Great of Macedon. 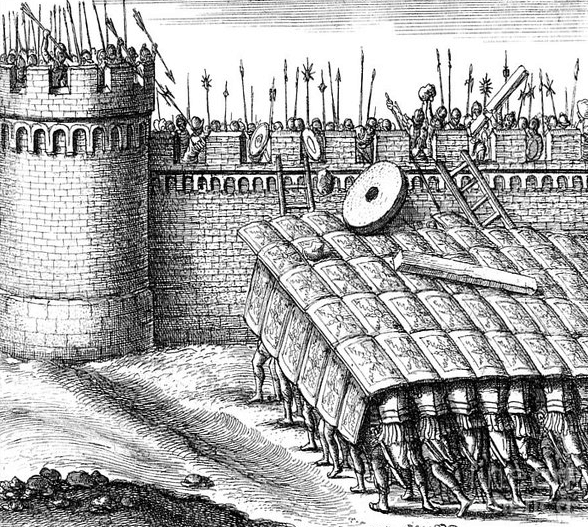 The testudo, meaning “tortoise” in Latin, was a shield-wall formation that was intrinsically Roman. It was a frontline strategy that was commonly used by the legionaries during battle. It was a defensive strategy that allowed the Roman foot soldiers to protect themselves from attacks against missiles and enemy bowmen.

The testudo arrangement was not the standard but was used in special circumstances to manage specific dangers on the battlefield. The arrangement was complex and difficult to achieve, requiring skill and synchronization from the soldiers.

The Roman historian Livy described how this defensive strategy enabled Roman warriors to push ahead against fierce opposition:

A testudo shaped along these lines was raised against the most minimal obstacle. The main imperative was that the front positions did not raise their shields over their heads in a defensive posture inspired by fear, but rather held them in front of them as they would in battle.

What’s more, the second-century Roman statesman and student of history, Cassius Di, described how the testudo was also used to secure pack animals such as ponies or donkeys. 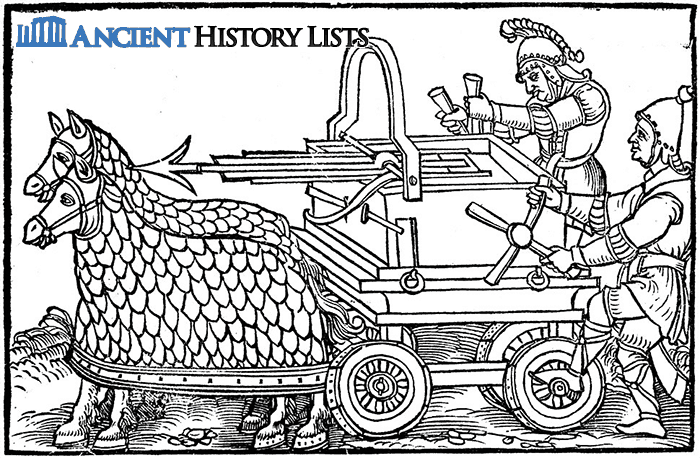 The Greeks developed the core ballista mechanism in the fifth century BC, but the Romans undoubtedly increased the practical scope of this weapon system for use on the battlefield. The carroballista was developed from the manuballista, an imperial era Roman siege engine. It was the most advanced two-armed torsion engine used by the Roman army. The major difference between these two technologies was maneuverability.

The carroballista was a fearsome combination of the Roman ballista and the catapult. It fired heavy bolts using a system of stored spring energy for maximum power. Two men were required to handle this weapon on the battlefield, and it was soon adopted as a major piece of Roman artillery. Contemporary reports state that each legion had 55 carroballista each. 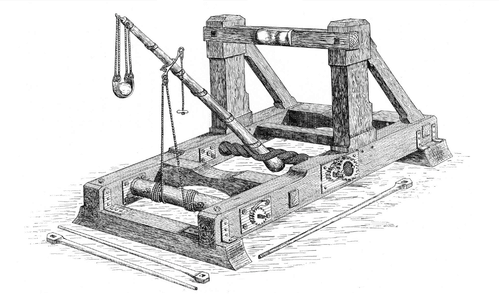 The onager was named after the wild ass because of its kick, and it was a type of catapult which made use of torsional force derived from a twisted rope or springs to generate the potential energy needed for the shot. It was first mentioned by the historian Ammianus who described the weapon as being like a scorpion.

Ballistae (as discussed above) were mostly used for attacking enemy troops with bolts, but the Romans also began to make use of the other artillery systems which could destroy walls and small fortifications with rocks. The Romans cleverly used combustible material along with rocks as projectiles and fired them at their opponents. This war tactic secured Roman victory in many battles.

According to reports, every Roman carried two types of pila, or javelin, into the battlefield, one thin, the other thick. The purpose of this weapon was to destroy an enemy formation by causing gaps to appear in their protective shell. Archeological evidence from a Roman site in Spain confirms this assessment.

Pila were shafts of up to one and a half meters long, fused with iron, and used as projectile weapons. The pilum had a great piercing power which could easily cut through enemy shields and wound their opponents.

This was one of the most interesting Roman weapons to be used tactically on the battlefield. The plumbata (plumbum meaning lead) was designed as a throwing dart with lead weights attached to it; the head of the weapon was made of iron. Like several of the weapons mentioned above, it could also have a wooden shaft attached to it. It allowed the Roman soldier to throw darts in a streamlined manner, either overhand or underarm.

There is no archeological evidence of the plumbata, but the sixth century emperor Maurice mentioned the martiobarbuli, which is another word for plumbata, as being part of the arsenal of the Eastern Roman Empire.

The pontoon bridge was not an entirely Roman invention but was a floating mechanism previously used by the Chinese and Persians for various military functions. Lightweight boats were used to deploy this floating bridge. The Romans took this invention and adapted it for their own ends, enabling them to gain a tactical advantage over their enemies.

Highways were vital for trade in the Roman Empire. The systematic construction of roads by skilled engineers allowed the exchange of goods and cultures to flourish. The Romans built a massive road network after the second century.

During the first era of the Roman Empire, 30 military highways led out of the capital city and almost 400 roads connected with them. The roads gave the Romans faster communication and exchange of trade goods. Roman legions now could travel almost 35 to 40km a day which was much faster than before.

Construction wasn’t limited to roads. The Romans also built houses along the way which allowed the army to establish communication networks and share intelligence and secret information over long distances.

The Roman military made use of the tools and techniques mentioned above to secure victory in battle.

They also made sure that their battles were meticulously planned, including a pre-war planning stage when tactics were discussed. After deciding on their tactics, deployment of the soldiers was the next phase.

Finally, they analyzed the danger and always had medicine and other commodities ready with them in case of emergency.

The Roman military has therefore set an example for modern global warfare and shown how tactics, planning, and weaponry can win a war.