Throughout history, inventions have defined civilizations and changed the way we live our lives. The ancient world was full of possibilities when it came to making life easier since there was so much to invent and discover. Ancient Rome is undoubtedly one of the most well-known civilizations for inventions that changed the course of human development. However, in many cases, Roman invention was more accurately innovation, bringing about changes to existing technology. Without further ado, here is a list of the top 10 ancient Roman inventions that led to major advances in engineering and architecture, establishing the Romans as one of the most dominant civilizations of the contemporary period.

Even though the first use of this incredible architectural invention predates even the earliest years of the Roman civilization, the arch truly became an essential structure in the general architecture paradigm once the Romans adapted it to their own designs. It was the Romans who first found a way to set an arch on top of two tall pedestals such that it would span a walkway (and in many cases, even highways). These arches went on to become pivotal engineering constructions that laid the foundation for many of the subsequent structural highlights of ancient Rome. Many bridges were built upon these arches, and so were the aqueducts, sewers, amphitheaters, and even the great Colosseum. Roman arches were later used in the Middle Ages when some of the most magnificent cathedrals in history were built. In fact, it was the only known method for putting a roof on a building without the use of support beams. 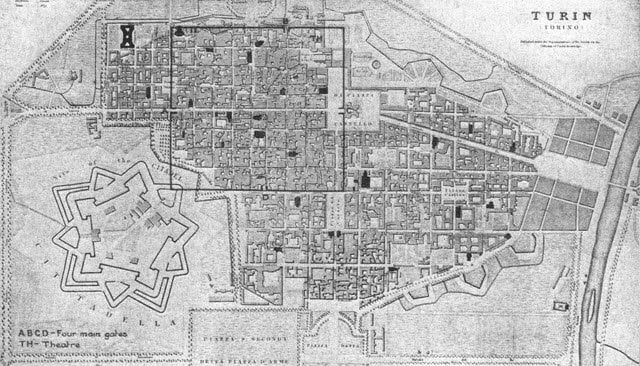 Again, the Romans were not the first to invent grid-based establishments and cities, and the earliest basic grid planning dates as far back as the ancient Indus city of Mahjong Daro and Harappa in Pakistan. But it was the Romans who embraced this concept, added a new dimension to it and implementing it on such a large scale that grid-based settlements became commonplace. A basic Roman grid was characterized by a rectangle or a square in a nearly perfect orthogonal layout of streets. The two main streets, the cardo and the decumanus, would cross each other at a right angle in the center of the grid. This grid was an ideal structure to organize the different components of a city such as housing, theaters, and stores into particular blocks. To avoid the city becoming a monotonous series of blocks, the Romans incorporated various items such as open theaters, public baths, markets, and other recreational facilities within the city grid. They then went on to standardize this pattern of settlement by building colonial cities and military camps throughout their huge empire, from Britain to North Africa, Italy, and the Eastern Mediterranean region. 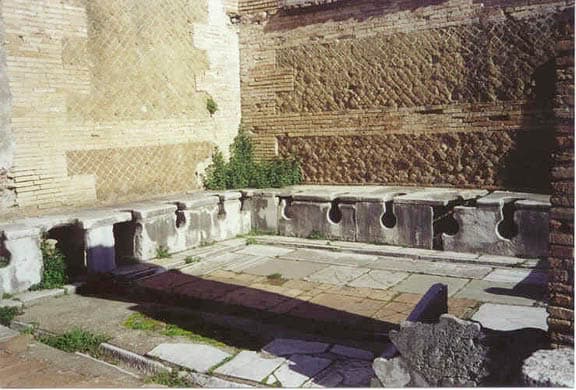 The ancient Roman Empire in many ways boasted the highest level of sewage and sanitation management in contemporary times. The Romans established a number of public baths, latrines, and an interlinked sewage line binding them all together in a complex and efficient feat of engineering. Rome and other major cities had an extensive network of sewers and drains that ran along the sides of the streets. The abundance of water in Roman aqueducts along with runoff water from local streams was regularly used to flush these drains and sewers. The flush would then dump all the waste into the nearest river (usually the Tiber), which does not sound the best sanitary solution but was far better than leaving the sewage lying around in the streets. The ancient Romans also excelled in the use of covered gutters and sewer lines to which the majority of houses in the city were connected. Without a doubt, their sewage and sanitation system made the ancient Romans forerunners for subsequent practices in sanitation throughout the world. 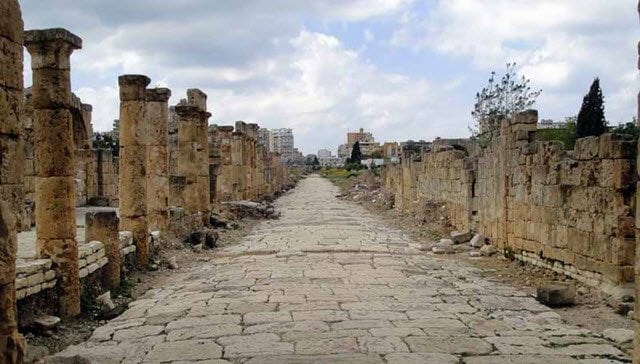 One of the main reasons behind ancient Rome’s impeccable and effective administration of such a vast empire was the construction of one of the most sophisticated systems of roads in ancient times. Roman roads and highways played a pivotal role in the rise of the Roman state, expanding all across the Roman Republic and then the Roman Empire. In a period of about 700 years, they built about 55,000 miles of paved highways around the Mediterranean basin and across Europe – a feat that ensured the fast and efficient movement of goods, soldiers, and information across the entire empire. Roman roads usually followed a straight route across the countryside, making travel efficient and fast. These expertly engineered routes were easy to navigate and the Romans were one of the first to use road signs and mile markers. They also made sure the majority of highways were well protected and patrolled. 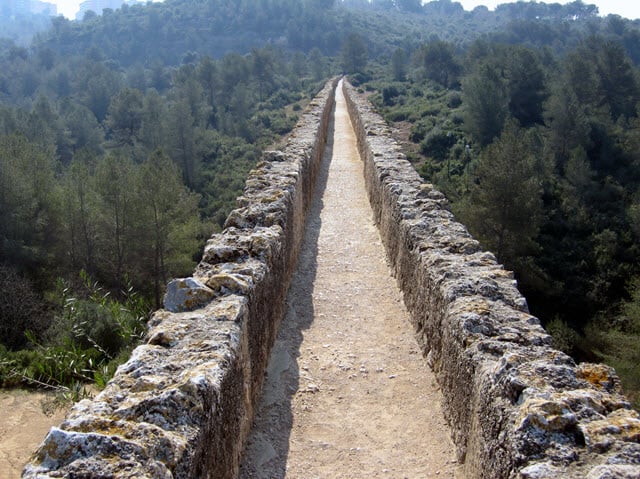 Back in the times of the Roman Empire and Republic, the Romans enjoyed many facilities which would not have been possible had they not mastered the technique of building aqueducts to transport water from rivers, springs, and reservoirs. The first Roman aqueducts were built around 312 BC and from then on took off as an engineering marvel that used the downhill flow of water to supply the city centers. The entire aqueduct network relied on various factors and the use of gravity to maintain a continuous flow, which made the overall engineering concept remarkable for its time. Once the water reached bigger cities like Rome, large reservoirs would then contain it. The public baths, fountains, toilets, and private villas could then all tap into the network and access the water. Being one of the most visible symbols of the ancient water transport system, the aqueduct stands as a true testament of ancient Roman engineering and innovation. 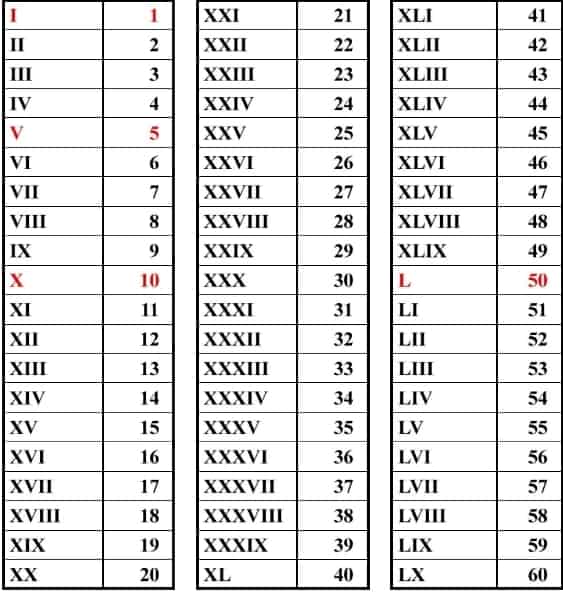 As the name already suggests, Roman numerals originated in ancient Rome. Constituting one of the most popular numbering systems still in use today, the first use of these numbers dates back to somewhere between 900 and 800 BC. Back then, the existing counting systems could not keep up with the need for ever complex calculation requirements. Roman numerals were developed to serve the purpose of delivering a standard counting method that could be efficiently used in communication and trade. However, these Roman numbers came with their flaws such as the absence of the number zero and the inability to calculate fractions, among others. Despite this, these numbers survived even after the fall of the Roman Empire. Their use in movie titles, books, and many other popular and cultural spheres today shows the long-lasting legacy of this ancient numerical notation.

The ancient Romans invented a number of surgical tools and techniques that led the way for subsequent developments in the fields of medicine and surgery. The Roman medical scene was heavily influenced by surgical advances achieved by the ancient Greeks. Medical practitioners in ancient Rome not only utilized all available tools, but also developed many new tools themselves and invented procedures such as the cesarean section. But they made the biggest surgical leaps on the battlefield by making field medicine a primary concern. During the reign of Augustus, a military medical corps was established to assist injured soldiers in battle. The Romans mastered medical innovations to curb immediate blood loss in battle, thus saving thousands of lives. They also invented tools like bronze scalpels, obstetric hooks, bone drills, and forceps, and also the rather frighteningly named vaginal speculum. The Romans are also credited with pioneering the earliest form of antiseptic surgery since they used to dip medical tools in hot water to disinfect them before surgery. 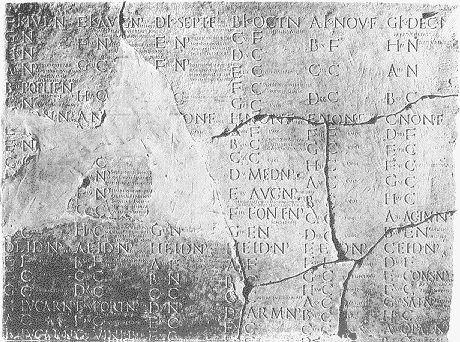 As the ancient Romans became the biggest civilization of the ancient Western world, they realized the complications of maintaining a standard calendar which could apply to the whole empire. It did not help that they introduced months with odd numbers of days because of a prevailing superstition against even numbers. Eventually, the calendar was so far from a regular timeline that Julius Caesar implemented a new reform, making the duration of a solar year the basis for the calendar. He also instituted the 12 months of the year. It is clear from the name that the calendar was named after Julius Caesar himself, and some Eastern orthodox churches use it to calculate holidays even today. Even though it was a seemingly perfect innovation for its time, the Julian calendar miscalculated the solar year by about 11 and a half minutes. This eventually led to the creation of the Gregorian calendar that relied heavily on the Julian model and was adopted in 1582 AD.

History is rife with autocrats who wanted to keep the public in the loop about official announcements and developments. Rome was the first empire to establish a sophisticated system of circulating written news which it published the Acta Diurna which translates as “Daily Events.” These handwritten news sheets were published daily and posted by the government in the Roman Forum from the year 59 BC to somewhere around 222 AD. The majority of the content in the Acta Diurna usually comprised of political news, trials, military campaigns, executions, major scandals, and other similar subjects. The Romans also published the Acta Senatus that recorded the proceedings in the Roman Senate, though this sort of journal was kept out of public reach until Julius Caesar made it accessible to everyone as part of the popular reforms he introduced during his reign. When the first modern newspapers were introduced in Europe, they may have had no bearing on the early Acta Diurna, but these news sheets were the pioneers of news publishing history.

The ancient Romans were particularly skillful at both quickly building new structures and maintaining their structural integrity. The revolutionary concrete developed by the Romans helped to build impeccable and lasting structures, playing a huge part in the architectural accession of ancient Rome. The scientists who studied its composition in detail found it to be superior to modern-day concrete and far more environmentally friendly.

The piece of concrete they experimented on had been submerged in the Mediterranean for more than 2,000 years. Analysis of this concrete found that it produced a compound that significantly differed from the concrete we use today and made it an incredibly strong building material. The Romans used to combine their cement with volcanic rock popularly known as “tuff,” enabling the resulting concrete to endure possible chemical decay. It is not much of a surprise that many ancient Roman structures such as the Pantheon, the Colosseum and the Roman Forum having been standing for more than two millennia.

Courtesy of the inventions and innovations listed above, it is only fair to say the Romans certainly stepped out from beneath the giant shadow of the ancient Greeks. From engineering marvels like aqueducts and arches to the amazingly stable concrete that stood the test of time, the ancient Romans truly succeeded in inventing and innovating their way to become one of the most prominent empires of the ancient world. Though many of their advances may have been forgotten in the light of far superior modern technological developments, their inventions encouraged subsequent societies to adopt news ways of governing, living, and understanding the world.