The people of Mesopotamia were highly religious, and Mesopotamian scribes recorded more than a hundred gods and goddesses. The pantheon of gods in Mesopotamia was an extension of their culture and spiritual beliefs. Though the names of the gods differed among different Mesopotamian civilizations, their roles were the same. As time went on, the gods changed and developed. For example, the Sumerian god of the sun Utu became Shamash for the Akkadians. The gods were all different, so let’s now have a look at some of the most famous ancient Mesopotamian deities.

1. Adad or Hadad – the God of Storm and Rain

The Mesopotamian storm god varied from place to place. In Babylonia and Assyria, he was called Adad, in Ugrait, he was Hadad, and in Sumer, he was known as Iskur. He was brought into the pantheon by the Amorites in the third millennium BC. This god had a two-edged aspect: he was both the giver and the destroyer. As a storm god, he destroyed life, and as a rain god, he gave life. Where hurricanes and storms were symbols of his anger towards his enemies and represented darkness and death, the rain showed his happiness. With this rain, the land bore grain and people were able to feed themselves, so he was also called the god of abundance. The god of heaven, Anu, was his father, and Shalash was his consort. However, some scripts say that he was the son of the god of all lands, Bel.

Adad’s symbol was a cypress, and his sacred number was six. The lion and the bull were considered his sacred animals. In Aleppo, Assyria, and Babylonia he was also known as the god of divination and oracles. Though he had no cult under his name, he was worshiped widely, particularly in the cities of Babylon and Ashur.

2. Dagan or Dagon – the God of Crop Fertility 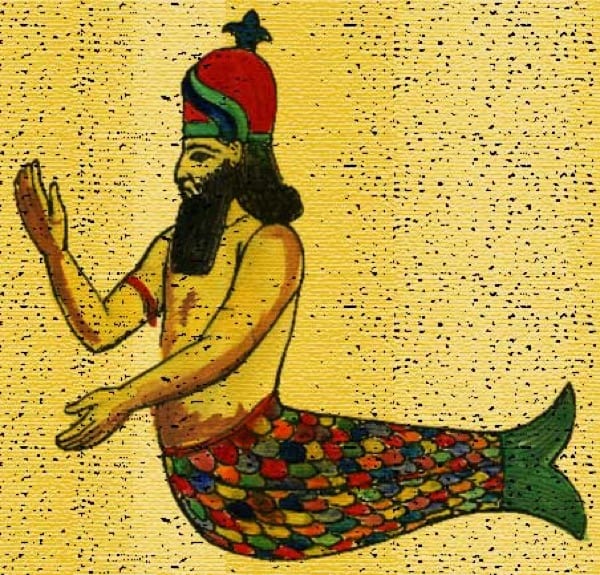 Dagon was the western Semitic god of the fertility of crops. He was worshiped widely in Middle Eastern areas during ancient times. The word dagon was the Ugaritic and Hebrew collective noun for grain, and Dagon was worshiped as far back as the earliest days of 2500 BC. According to texts discovered at Ugarit, or modern-day Ras Shamra, the god Baal was his son. He had his primary temple in ancient Ugarit and was known as the god of the Philistines in Palestine. He had many other sanctuaries, such as those found at Beth-Dagon in Asher and Gaza. The Code of Hammurabi states Dagon as the protector of the people of Tuttle. In the second millennium, he appeared in different texts, letters, and lists of offerings. His function as the god of crop fertility or vegetation was handed down to Baal in 1500 BC. His disciples often credited him as the inventor of the plough. 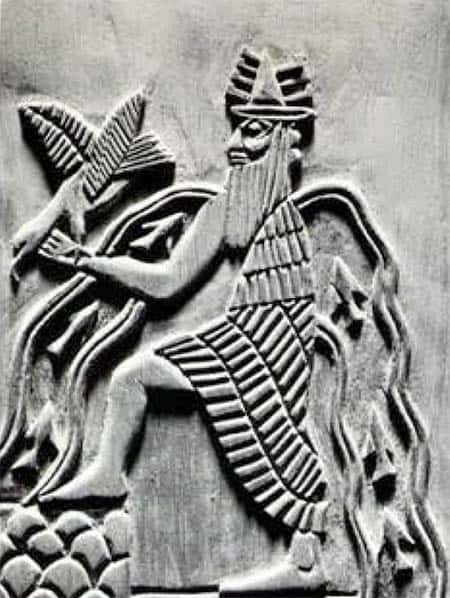 Known as Enki in the Sumerian language, Ea was the Mesopotamian god of water. He was also one of the triad of deities alongside Enlil and Anu. At first, he was no more than a local deity, but soon his worship was taken to another level. He became one of the important gods known as the lords of Abzu or Apsu, the god of fresh water. He was represented as a half-fish, half-goat creature. It is from him that the figure of Capricorn derives. Being the god of water, he was the patron deity of cleaners as well. Ea has associations with magic, incantations, and wisdom, and was important to exorcists and diviners. For exorcists, he had an even higher significance as they received from him the knowledge of the rituals required to expel evil forces. In addition, he brought forward the patronage of arts and crafts.

In the Babylonian myths Atra-hasīs and the Epic of Gilgamesh, Ea acts as both the creator and protector of humankind. He planned to use clay to create humans so that they could serve the gods by performing their work. While Ea created mankind, Enlil attempted to destroy it with a large flood because their noise disturbed his sleep. Aware of Enlil’s intentions, Ea had already told the sage Atrahasis to construct an ark to help humanity escape the devastation.

4. Nabu – the God of Wisdom and Writing

Nabu, the god of art, wisdom, and scribes, was also known as Nisaba in Sumerian mythology. He became famous in Babylon during the first millennium as he was the son of the god Marduk. He was also worshiped in Borsippa, Babylon’s sister city. Every year, his statue was moved from Borsippa to Babylon in honor of his father. His symbol was a stylus on a tablet, and due to this, clay tablets with calligraphy writing were offered at his temples. Tashmet, the Akkadian goddess was his wife.

Nabu was said to be the inventor of writing. He was also thought to be an oracle and was associated with Sin, the god of the moon. His iconography depicts him as standing with his hands in the posture of a priest wearing a horned cap on his head. He rode on a winged dragon called Sirrush, which initially belonged to his father. The Babylonians also identified him with the planet Mercury. The second century BC witnessed a fall in his worship when cuneiform became nothing more than a lost art.

5. Nergal – the God of Plague and War 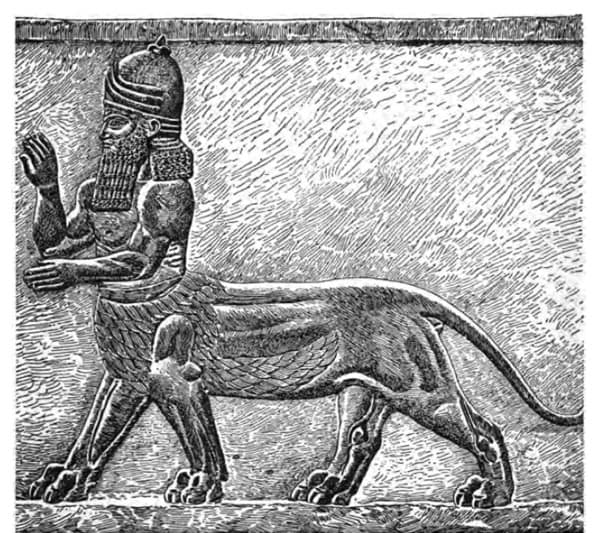 In the Sumero-Akkadian pantheon, Nergal was a secondary Mesopotamian god. He was identified with Meslamtaea and Irra as the god of war and scorched earth. He was believed to be the benefactor of humans, listening to their prayers, bringing life from death, and protecting livestock and agriculture. Ancients hymns also show him to be the god of devastation, hunger, and pestilence.

The ancient god of earth and air, Enlil, was among the chief deities of the Sumerian pantheon. Later the Babylonians, Akkadians, Hurrians, and Assyrians also began worshiping him. His central temple was the temple of Ekur in Nippur, which people believed he had built for himself. He was also known as the mooring rope between heaven and earth. He took so much pride in his holiness that he thought the other gods should not even look upon him. His cult declined in 1230 BC when Nippur was taken over by the Elamites. Finally, he was adopted as the chief Mesopotamian god in the pantheon by the Babylonian god Marduk.
Enlil is involved in a Sumerian myth where he is seen separating heaven (An) from earth (Ki) as an act of making the land a place for humans. In another Sumerian flood myth, Enlil rewards Ziusudra with immortality for surviving the massive flood. In the Babylonian myth related to the flood, Enlil is depicted as the flood itself. And last but not the least, his seduction of the goddess Ninlil in different guises resulted in the birth of Nanna, the moon god and the deities Nergal, Enbilulu, and Ninazu who belonged to the underworld.

7. Ninurta – the God of War, Hunting, Agriculture, and Scribes

The son of Enlil and Ninhursag, Ninurta first appeared in texts during the third millennium BC as the god of local towns and agriculture. Soon his role changed as cities became militarized and began to fight each other. His wife was Gula, the goddess of healing. Some old inscriptions also state that he was married to Bau. Though his main trait was aggression, he had associations with protection and healing too. His union with Gula helped him invoke magical spells to head off demons and diseases. Depicted as a courageous warrior, he held a bow and an arrow along with a mace called a sharur. In some Babylonian artworks, he is seen riding on the back of a lion with a scorpion’s tail.

He first originated in Sumer as Ningirsu, and texts from this time say he was the son of Enlil and Ninlil. He was recognized as the god of war during the second millennium BC after he was featured in the Epic of Anzu. Ningirsu changed to Ninurta sometime around the first millennium BC. He was the champion of the gods and savior of humanity. Up until 1500 BC, he had associations with growth and harvest. He was a god who performed great deeds, but he was also seen as flawed in many ways. 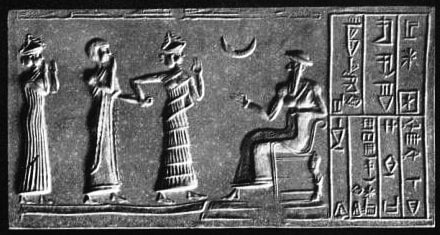 Nanna was the son of Ninlil and Enlil who later came to be known as Sin in Akkadian mythology. The two main places where he was worshiped were Harran and Ur in the northern and southern regions respectively. He is among the oldest of the Mesopotamian gods. His chief cult lies in Ur, and he was mentioned in different inscriptions and hymns there between 2047 and 1750 BC.

His birth is related to the myth of Enlil and Ninlil where Enlil seduces Ninlil and she becomes pregnant. Ningal, “the great lady” was his wife, the sun god Utu-Shamash was his son, and Inanna, the goddess of love, was his daughter. Unusually, in the cult of Nanna, the moon was thought to be the father of the sun. This may have come about because hunter-gatherers were guided by the moon as they traveled.

The son of Sin or Nanna (the moon god), Shamash was also known by the name of Utu in Sumerian mythology. According to some stories, Inanna was his twin sister who encompassed several powers, and Sumerian texts show a strong bond between the two. His wife was the goddess Sherida. For the people of Mesopotamia, the moon was of more importance than the sun, and the role of the sun only became significant when they began to learn about agriculture.

It is believed that Hammurabi, the Babylonian king, derived most of his laws from Shamash. Being the sun god, he overpowered the evils of darkness, and when night took over, he was one of several judges of the underworld. He is also known as the governor of the universe and, as such, is seen seated on a throne with a staff and a ring in his hands as the symbols of righteousness and justice.

Gibil was worshiped in Mesopotamia before the beginning of the Seleucid period. As well as being the god of fire, he was also the refiner of metallic objects, and hence the patron of metalworkers. Gibil imparted wisdom about metallurgy, and many writers describe him as “the god of the forge.” He had a mind so vast that even the other gods were unable to fathom it. He was involved in purification customs and rituals as well.

The people of the Mesopotamian period were very religious, and they created gods for everything that existed on earth; the list is never-ending. Due to its many civilizations, the Mesopotamians had a variety of gods, and the ones who made it on to this list represent just a few of them. Mesopotamian mythology is so vast that it would be difficult to cover every aspect of the pantheon.