When we talk about the world’s greatest and longest cultures, it is natural to think of Egypt. Situated in the north east of Africa and the south west corner of Asia, Egypt has been part of the world’s longest running historical period dating back from the sixth to the fourth millennia BCE. Archaeologists have found evidence from various Egyptian sites that proves how the mighty structures which were being built in those days were strong enough to proudly remain standing to this day.

Boasting one of the longest river in the world, the Nile, Egypt has been home to many people choosing to live on the fertile banks of the river. These people developed the art of farming and learnt how to grow financially viable crops. The Nile region was also one reason why Egypt was under colonial rule for so many years.

Ancient Egypt was controlled by many dynasties and kingdoms. Historians have divided this into three kingdoms in order to define them efficiently while describing the period between each of them. This gives us a framework in which to understand the historical wealth of Egypt. Ancient Egypt has a long history, evidenced by the presence of many enduring pieces of architecture.

Egypt is predominantly known for its many unique monumental sites that have captured the interest of thousands of tourists. The architecture is composed mainly of sun-baked mud bricks and limestone which adds to its unique appeal. The most famous monuments made of these materials are well known across the world, the pyramids, but these are not the only structures worth seeing in Egypt. There are many beautiful and enchanting places to visit, all of which have their own unique charm. Here is a list of the top 10 most iconic architectural structures in Egypt that you must know about and visit whenever you get the chance:

Contents hide
1. The Great Pyramid of Giza
2. The Great Sphinx of Giza
3. Valley of the Kings
4. The Karnak Temple
5. Abu Simbel Temples
6. Colossi of Memnon
7. Luxor Temple
8. Temple of Hatshepsut
9. Pyramid of Djoser
10. The Pyramid of Sneferu

1. The Great Pyramid of Giza

One of the seven wonders of the world, the Great Pyramid of Giza is the largest of all the surviving pyramids in Egypt. Constructed from 2580 to 2560 BC (fourth dynasty), the pyramid has no documented evidence of its construction but there are many theories that could throw light on its history. Archaeologists believe that the pyramid was built over a tomb dedicated to a pharaoh of the fourth dynasty named Khufu and his family. The materials used for the construction of the pyramid were granite and limestone. Initially, it was 146.7 meters tall but with weather conditions and erosion, it has now been reduced to 138.8 meters, and stretches 230 meters in length. The pyramid has three chambers, the King’s Room, the Queen’s Room, and a large passageway known as the Great Gallery. Around the pyramid, there are three smaller pyramids that are believed to have been built for Khufu’s wife. The great pyramid has been built from heavy stone blocks that are stacked repetitively all the way up to its head. It was built by the royal architect Hemiunu and skilled workers were used in its construction instead of slaves. It is believed to have taken 20 years to complete.

2. The Great Sphinx of Giza 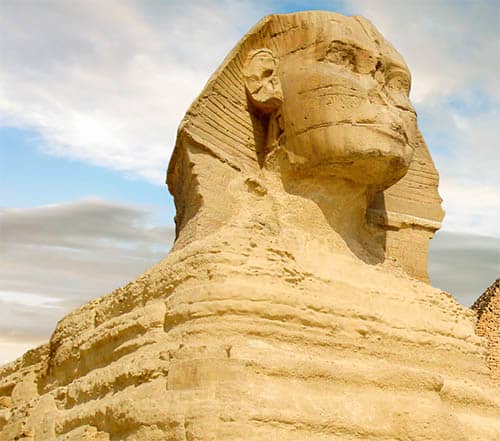 The Great Sphinx of Giza is a statue of the mythical creature known as the sphinx. In Egyptian mythology, the sphinx was a creature with the body of a lion and the head of a human. Archaeologists believe that it was created around 2500 BC and represents the pharaoh Khafre of the fourth dynasty’s Old Kingdom. The Great Sphinx is a monolith which was modelled in the shape of a lion at the back from various layers extending to its tail and with a human face believed to be that of Pharaoh Khafre. It is a gigantic structure that is 240 feet (73 meters) long, 65 feet (20 meters) high and six meters wide. The facial features of the structure alone are each three feet (1 meter) tall and are carved out of bedrock. The mythical sphinx has great prominence in the history of Egypt and is believed to be the source of the food cycle making it one of the most ancient and revered structures in Egyptian history. It is also believed that the structure was created to guard the great pyramids, but it has eroded over time.

3. Valley of the Kings 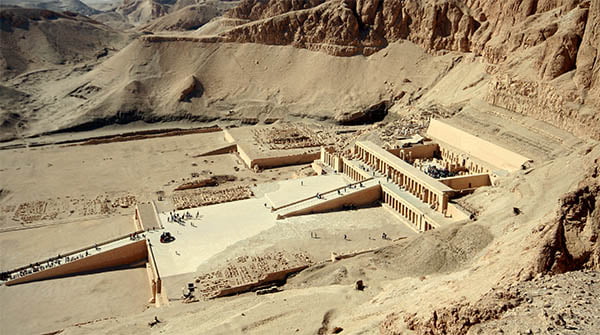 The Valley of the Kings or the Valley of the Gates of the Kings is a valley which is believed to be the burial place of the great pharaohs. At first the pyramids were only used as tombs for the kings but around 1500 BC the practice was changed to the burial of prominent royal figures as well. Archaeologists have found 63 tombs and over 120 chambers ranging in size depending on the prominence of the person buried there. The walls of the underground tombs are decorated with graffiti in various languages and hieroglyphs that depict ancient Egyptian culture. The most remarkable mausoleum which was excavated here was that of King Tutankhamun. The tomb preserved the mummy of King Tut and other precious artefacts made up of gold and various other materials. The Valley of the Kings has a special place in the history of Egypt due to its great archaeological wealth. 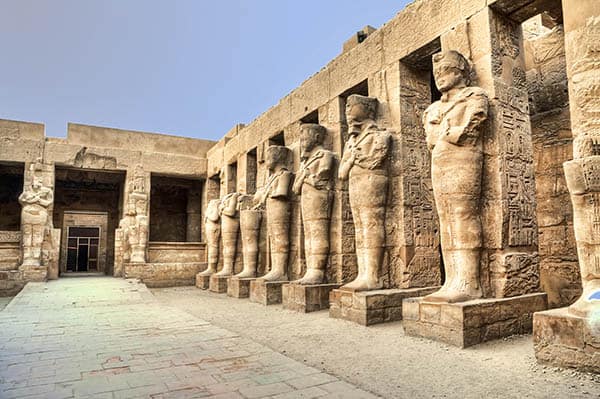 The Karnak Temple was built over a period of 3,000 years. Over 30 different kings contributed to the construction of this temple. Its construction was initiated in the Middle Kingdom under the reign of Pharaoh Senusret I and was not completed until the emergence of the New Kingdom. The temple is dedicated to the Theban tribe with the god Amun as its head. The Karnak Temple is a part of a vast Karnak complex which is divided into four major parts: the precinct of Amun-Ra, which is open to the public, and three other parts, the Precinct of Mut, the Precinct of Montu, and Temple of Amenhotep IV which are private. The walls of the temple have large hieroglyphics and structures carved into them that attract a large number of tourists. 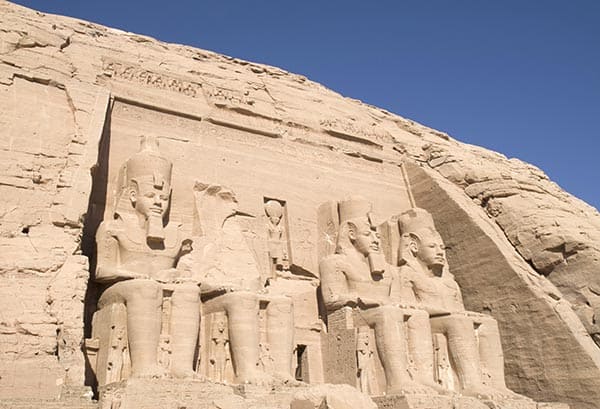 The Abu Simbel temples are two temples in Abu Simbel carved out of massive sold rocks. Situated on the banks of Lake Nasser, the temples were built under the reign of Pharaoh Ramesses II of the 19th dynasty in the 13th century BC. The exterior part of the temple has four humungous 20-meter statues of Ramesses crowned and seated on a throne. The interiors of the temples have various colossal statues lined up and decreasing in size with the rooms from the entrance to the sanctuary. A few carvings of baboons and people worshipping can also be found around the entrance to the temple. The temple is said to be have been dedicated by the king to himself and his queen Nefertari. One of the four statues of Pharaoh Ramesses II has been damaged by natural erosion and weather conditions over the years. 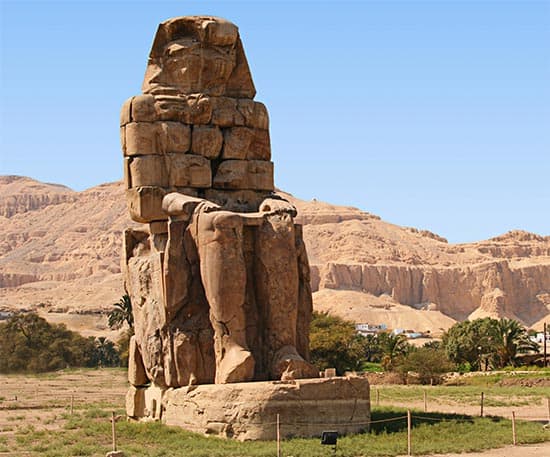 Situated in the west of Luxor, the Colossi of Memnon are two gigantic statues of the Pharaoh Amenhotep III of the 18th dynasty. Made up of blocks of quartzite sandstone, the statues are of the pharaoh seated on his throne next to which two other smaller statues can be seen. The statues are of his mother Mutemwiya and wife Tiye. The figures are 18 meters long and were created in 1350 BC. A famous legend says that after the partial destruction of the northern statue, its remaining lower half was reputed to sing. Hearing the “Vocal Memnon” sing was a sign of luck and people who happened to hear it would be blessed with power and good fortune. This fable increased the number of visitors to the statues. 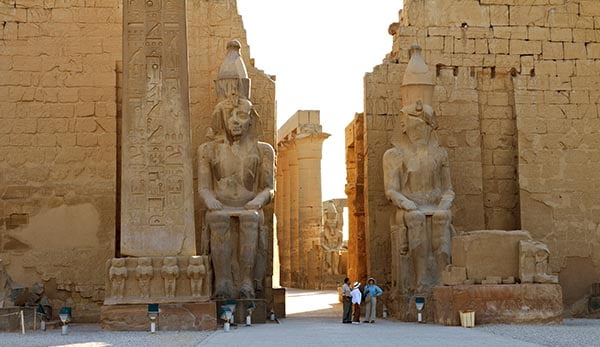 Situated near the river Nile, the Luxor Temple is a large temple complex. The temple was built around 1400 BC and was dedicated to the god Amun and for the “rejuvenation of kingship” as many of the Egyptian kings were crowned there. The temple was built from sandstone and was supposedly constructed under the kingship of various rulers throughout the years. The Luxor Temple is widely known for its large statues of Pharaoh Ramesses and other giant obelisks. Initially, there were two obelisks made out of graphite of the same height and shape, though currently only one is present at the Luxor temple; the other is in Paris and is called the Luxor Obelisk. 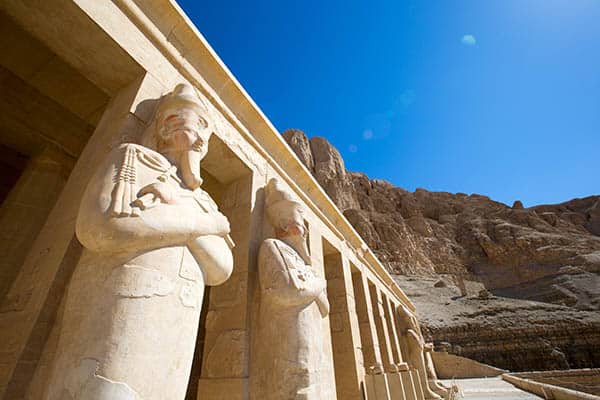 The Temple of Hatshepsut, also known as Djeser-Djeseru, is situated in Deir el-Bahari on the banks of the river Nile. The temple was built around 1400 BC, under the reign of Pharaoh Maatkare Hatshepsut and is dedicated to Amun and Hatshepsut. This is a mortuary temple, a temple dedicated to the reigning pharaoh and to also honor him in the afterlife. The Temple of Hatshepsut is one of a kind as it was built by a female pharaoh as can be seen from sculptures present inside the temple. This example of Egyptian architecture is unconventional in its construction and representation of the pharaohs. 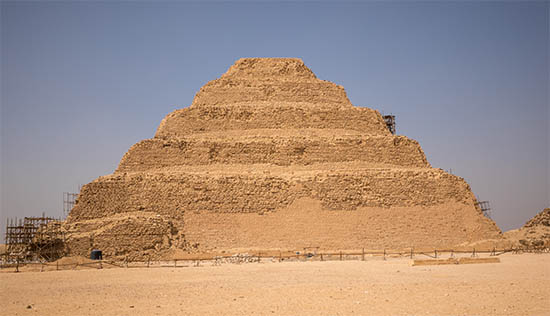 The Pyramid of Djoser is a step pyramid made of large blocks of limestone in the Saqqara necropolis of Egypt. It is the tomb of Pharaoh Djoser and was constructed by his chancellor Imhotep in the 27th century BC. It has a height of 62.5 meters and is built in a way that is not exactly a grave for the king but to facilitate his successful afterlife in order for him to be reborn. Inside the pyramid there are long, tunneled chambers spreading a total length of six kilometers. The tomb was not just for the pharaohs, it also was a place to bury members of the royal family. The burial chambers are made up of granite and were once filled with precious jewels which have long since been looted. 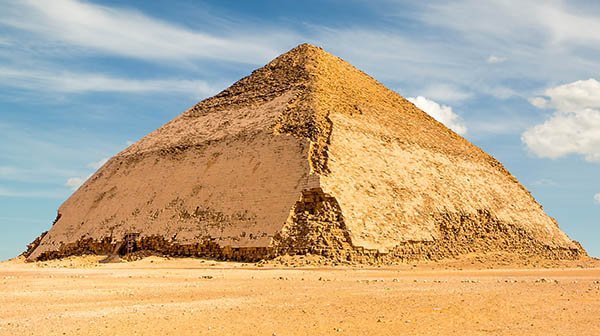 The Pyramid of Sneferu or as it is more commonly known, the Bent Pyramid, is located in Dahshur near to the capital Cairo. The pyramid was built by Pharaoh Sneferu of the Old Kingdom in 2600 BC. It gets its name from its shape which appears to be bent at the head. It has a height of 104.74 meters and takes a shallower angle in its top section. The smooth surface built out of polished limestone is still intact but its shape seems to be an indication of the potential collapse that the pyramid could have suffered if it had been made at a steeper angle as originally planned. It is also believed that because the death of Pharaoh Senferu was getting close, the builders adopted a shallower angle to speed up the construction. The Bent Pyramid is one of the many pyramids present in Egypt but its unusual shape and appearance is the reason why it has become a central attraction for tourists.

Architecture in Egypt is one of the country’s main tourist attractions as no other place is home to so many pyramids and unusual structures. The Ancient Egyptians’ celebration of their culture and monarchs can easily be seen in these great edifices. The number of structures dedicated to pharaohs and their mausoleums depicts their strong belief in the afterlife, and these ethereal and unconventional pieces of architecture embody the beauty and mystery of the Ancient Egyptian civilization.