As well as being the most densely populated country in the world, China has one of the richest histories and cultures. China’s history can be divided into prehistoric, ancient and imperial China and each subsequent dynasty provides us with an insight into how this mighty country has developed over the years. The country’s myths and legends are a rich vein of culture which are worth a closer look. So listed below are the top 10 most popular myths of ancient China: 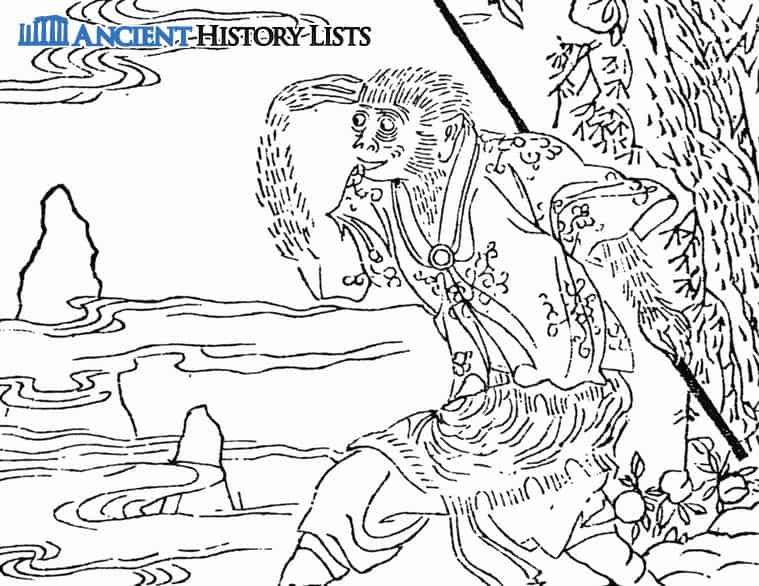 Of all the species of monkey to be found, China’s most famous one is Sun Wukong, or the Monkey King. He is one of the most famous and loved characters in Chinese mythology and the protagonist of the classic 16th-century tale, The Journey to the West.

The story tells of how Sun was a very mischievous monkey known to have created havoc in heaven with his eagerness to conquer the world. It was said that he was able to do so using a rod which he stole from the Dragon King of the East Sea. But Sun was eventually defeated by Buddha who asked him to somersault out of his palm. Sun could not manage to get even halfway out of his hands and was imprisoned for 500 years under a magical mountain formed by Gautama Buddha’s palms. He later became a companion to the monk Xuanzang and accompanied him on his adventurous journeys.

2. The Legend of Mirrors

When you look in a mirror, what do you see? Yourself, right? But this is not what the Chinese believed in ancient times. They thought that the reflection in the mirror was not a reflection at all, but a species from another planet. The mirror legend says that these creatures would mimic us to learn our behaviors. Eventually, when they were ready, they would emerge from the mirror and take our place in the real world.

It was also believed that creatures from the past had attacked the population in a thirst to replace them. But they were finally stopped and thrown back to their original home by Emperor Huang Di. The creatures on the other side were called “fish” and it was believed that they could be seen for a split second out of the corner of the eye. They were thought to be the watchmen standing at the gate which served as an interface between the two worlds.

The Chinese dragon is the most iconic creature in the history of China. It is considered to be the controller of water, and dragons in ancient times were symbols of the emperor. They were also thought to bring good luck and fortune. The fearsome and mighty dragon was the noblest of all creatures but at the same time it was kindly and thought to have a golden heart.

Dragons are believed to represent both good and bad. They are responsible for tidal waves and destruction and are worshiped as the protectors of agriculture. Dragons are thought to represent courage, and it is considered auspicious to be born in the Year of the Dragon. This significance has grown out of the fact that many mighty warriors were born in Year of the Dragon. 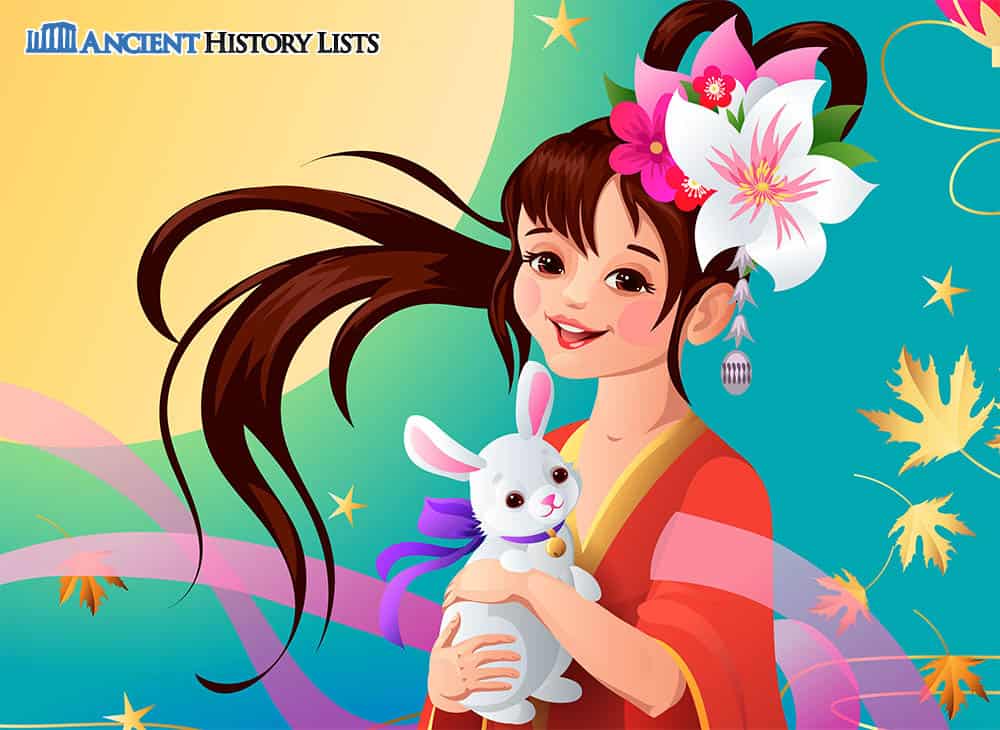 Jade Rabbit is also known as “the rabbit who lives on the moon.” According to mythology, Jade Rabbit is the companion of the moon goddess Chang’o. The story began when a poor old man came begging for food. At that time, the forest creatures, the monkey, otter, jackal, and rabbit, used to bestow benevolence on those in need, as it was thought that doing a good deed today would be repaid tomorrow.

So in order to help the man, the monkey brought fruit, the jackal brought a pot of milk curd, and the otter collected dead fish from the pond. Now the rabbit, who was not very wise and only ate grass, offered himself to the man. But the man did not kill him, and instead revealed his true identity. He was the god Sakra. Later on, he drew the rabbit’s image on the moon to honor it.

5. The Weaver Girl and the Cowherd

This romantic myth tells the tale of two people: the weaver girl and the cowherd. Their relationship was not accepted by society and they were banished to opposite sides of the Silver River. But according to legend, once a year, on the seventh day of the seventh lunar month, a flock of magpies would come together forming a bridge to unite the lovers.

Do you love Chinese New Year celebrations when you can mark a new beginning? People all over the world celebrate it with their family, friends, and loved ones, hoping for good times ahead. The most important aspects of Chinese New Year are the decorations and firecrackers. But this tradition has a myth attached to it.

According to Chinese mythology, the nian is a fierce beast who lived underwater and would come out once a year at the beginning of Chinese New Year. He used to feed on animals and humans. But this beast had a weakness: he hated loud noise, fire, and the color red. To ward him off, the Chinese wore red clothes and lit lamps and firecrackers, and this is how the modern Chinese New Year tradition began.

7. Pangu – The Creator of the World 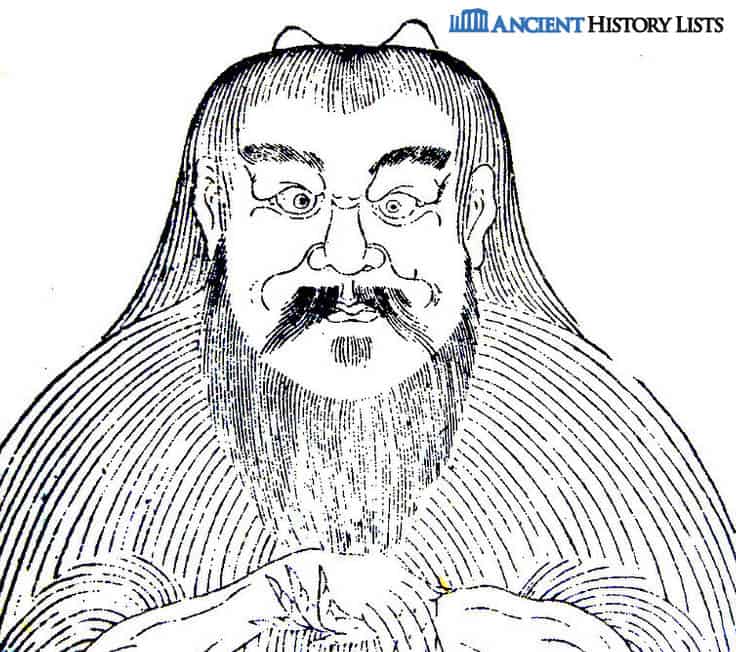 The earliest and most ancient Chinese myth includes the legend of creation. Pangu was considered to be the first living being on Earth, born from a cosmic egg. He is described as a creature with a hairy body, two tusks, and two horns and was thought to have created the world.

The first thing he did was to separate yin and yang with his ax, yin becoming the earth and yang the sky. Every day he pushed the sky a little higher, and this process went on for 18,000 years. He then shaped the earth by cutting out the valleys and dividing the sea.

There are many variations of this myth, one of which tells how Pangu married the daughter of the Dragon King and had a son.

This is one of the oldest ancient Chinese beliefs. It tells the tale of Yu the Great who was a demigod who could change form whenever he wished. He could transform into a bear, a dragon, or a human. It is believed that he was also the creator of the mythological Xia dynasty.

The myth tells the tale of how Da Yu was born. There was a man called Gun who was given responsibility for controlling the great floods. But to do this, he stole a piece of soil from heaven. The mighty gods were furious and issued the order for his execution. But a miracle occurred. After three years, Gun’s body split open and a son was born. This was the great Da Yu. After years of hard work, and with the help of dragons, he made the earth suitable for human habitation.

9. Nuwa – The Creator of People

According to Chinese mythology, Nuwa is the goddess of all humankind. It is said that she created the human race. According to legend, the four pillars of heaven were destroyed and chaos broke out. Fires burned out of control and the oceans flooded. Animals became wild and began to eat people. It was Nuwa who repaired this damage by cutting off the legs of the great turtle to set them as the new four pillars. After this peace was once again restored on Earth.

According to Chinese mythology, Nuwa is also the patroness of matchmakers, and established the rules of marriage. Another saying is that, along with the mountain spirits, she created a beautiful palace that paved the way for the later great Chinese cities. 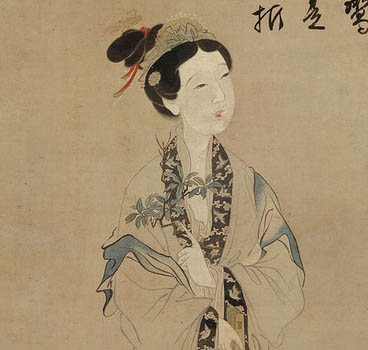 This is a tale about the beautiful moon goddess, and revolves around the elixir of life. This ancient story takes us back to when Emperor Jade was on the throne. The emperor had 10 sons who were turned into 10 suns. These suns created havoc on earth and made conditions impossible for people to survive. Then came a courageous archer who set out to destroy them. He killed nine of the suns but left one. The archer was named Yi. Later, Yi was awarded for his bravery with the elixir of life.

But one day when Yi was out hunting in the forest, somebody tried to break into his house and steal the elixir. Yi’s wife refused to give it to him and drank it all herself. As she drank the elixir, she became so light that she was taken upwards towards the moon, which is where she is thought to live to this day.

China has a rich history of myth and legend, and many traditions that survive today have their roots in these ancient stories. From battles between gods and demigods, to superstitions which began as ancient legends, these stories are there to entertain and amuse. However, it is interesting to remember that many customs that we now take for granted have their roots in centuries-old myth and legend.