Our civilizations have been built on the hard work of our ancestors, and the heritage we cherish is the result of years of learning and knowledge. Countless battles have been fought and numerous expeditions have taken place to explore the planet and create a better world for future generations.

History does not do justice to the efforts of our predecessors, and without their contribution we would not be where we are today. Our knowledge and understanding is built on the foundations which they built; our contributions are simply updates and innovation. The list of these historical pioneers is too long to describe, but one man who has left a legacy not only to his own nation but to all of us is Confucius, or “the great Chinese sage.”

Confucius was born on September 28, 551 BC in the district of Lu (modern-day Qufu) during the Zhou dynasty. He was born into a middle-class family but after his father’s death when Confucius was only three years old, the family was consigned to poverty. He married his wife Qiguan at the age of 19 and had one son and two daughters, one of whom died at a very young age.

Confucius worked in the fields and as a bookkeeper but later on became a teacher, instructing a small group of devoted followers about morality and ethics. Soon the district started to pay attention to his teachings and he became the town’s governor. This marked the beginning of a journey that led to his reputation as a great philosopher and thinker.

Through his teachings, Confucius touched the lives of people not only in China but also Japan, Vietnam, and Korea who also have a deep connection with his teachings. His sayings and philosophies are collectively known as Confucianism and form the basis of a world-famous collection known as the Analects of Confucius.

Confucius played a key role in history through his impactful philosophies and teachings. Though it is hard to do justice to all of his contributions, here is a list of the top 10 of them to give you an idea of the impact Confucius has had on societies around the world: 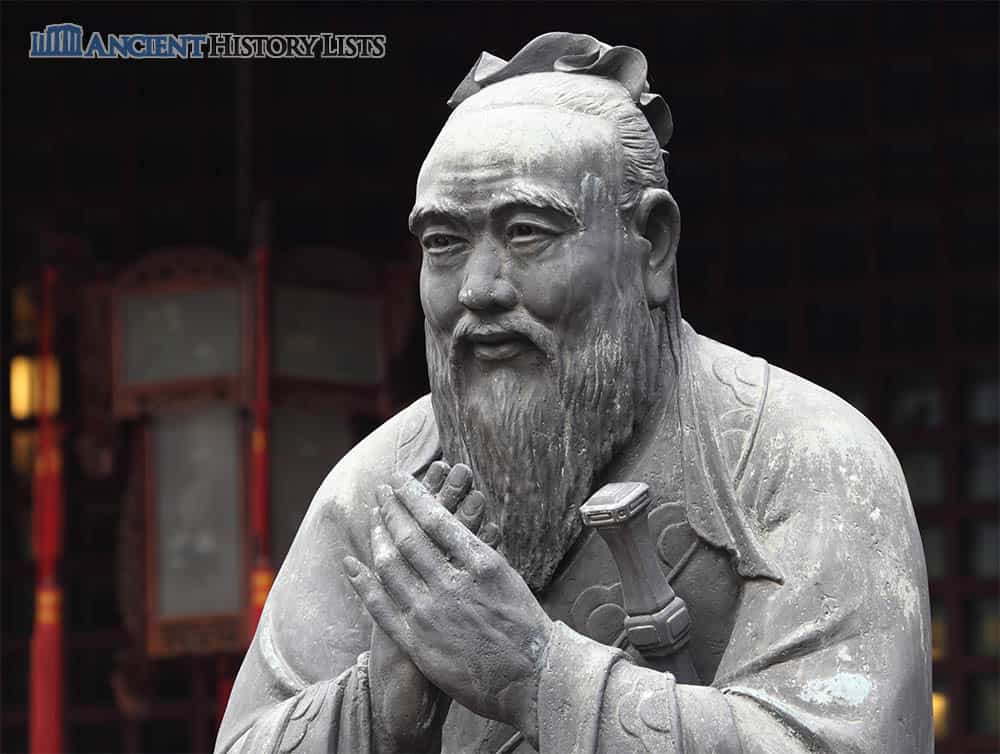 Confucianism is a philosophy or way of life which is named after its father and founder, Confucius. Also known as Ruism, Confucianism can be regarded as a religion, tradition, teaching or an ideology. It first emerged as an inspiration from Buddhism and later developed as an individual philosophy which had an impact on the lives of many people. Confucianism includes many philosophies that not only teach us how to live a moral life, but also how to efficiently run a fair government.

In many ways, Confucianism carries the essence of the belief in a divine presence as many of his teachings talk about how a human must travel the lawful path to heaven. It treads a path somewhere between humanity and religion.

His teachings have affected the populations of many East Asian countries like China, Vietnam, Korea, and Japan and are still much revered today. Educational establishments in Korea not only see him as an influential personality but also a valued and learned teacher which is the reason why the dates of his birth and death are still celebrated twice a year in a ceremony called the Seokjeon Daeje.

The teachings of Confucius brought about something of a cultural revolution in the world, and numerous cultures adopted his philosophy. His simple yet virtuous way of living fascinated millions of people and introduced them to a new way of thinking. His ideas on humanism touched the lives of many people and broke cultural boundaries.

Neo-Confucianism is an updated version of Confucianism. It strived to bring rational changes to Confucianism such as removing superstitions which came about from the mystical theories of Buddhism and Taoism. Neo-Confucianism promoted a reasonable and rational take on things which appealed to its followers. It began during the Tang dynasty but fully emerged as a newer version during the Song and Ming dynasties.

This revival of Confucianism in China was led by the great philosopher Zhu Xi. Zhu Xi wrote several books and essays to provide a clear and logical view of Neo-Confucianism. His philosophies and thoughts were similar to many previous great philosophers around the world who had been influenced by Confucianism. The books he wrote influenced China for years and were included in Chinese civil examinations for over 10 decades. The Four Books or Shishu, written by Zhu Xi and listed below, explored the belief system of China through the eyes of Confucianism: 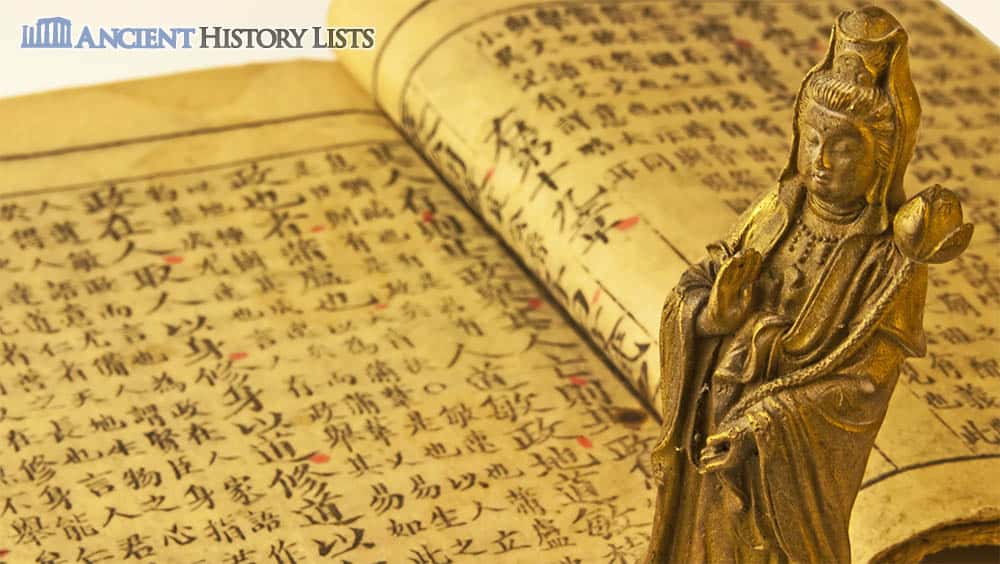 The Five Classics were texts from the Western Han dynasty’s state-sponsored curriculum, and were written during the Warring States Period.

It is believed that all five of these classics were compiled or edited by Confucius.

Confucius believed that the best way to make a government successful was for the ruler to be virtuous and lead by example. If the ruler is virtuous, then the people will automatically follow suit. If the king is competent and works ethically and no one is forced to do things against their will, then people will ultimately look up to their ruler. Confucius had very strong views on the practice of bribery. He believed that an inner sense of shame should stop people from doing wrong and lead them on the path of virtue.

Confucius was a learner and a mentor. He contributed to China’s educational system not only through his teachings and ethics but also by promoting education for the poor and underprivileged.

The Zhou dynasty offered education by government officials and public administrators but this was only available for aristocrats, and the general public had no access to education at all. Only those belonging to the elite class had the opportunity to gain a traditional education based on six arts: chariot driving, mathematics, music, archery, calligraphy, and rituals.

In order to break this feudalism and aristocratic monopoly, Confucius set up private institutions to teach students of all social classes. “My teaching is open for everybody without distinction,” he said. He admitted many disciples and trained them to master the six arts. Confucius himself never stopped learning and continued to hone his skills in order to better teach others.

7. Coined the Concept of Meritocracy

One of the most impactful reforms introduced by Confucius was that of meritocracy. Meritocracy is the authority of a person according to his own abilities and not by noble birth.
As could be seen in almost every prominent government organization, in ancient times, governmental posts were filled by the heirs of the previous post holders, and they were trusted with this authority only on the basis of their family’s status.

Confucius fought against this feudal system by introducing the idea of the imperial examination structure in China. This structure allowed anyone who passed the examination to hold the position of government official. He believed in the “nobility of virtue and not in the nobility of blood.”

The policy was introduced during the Sui dynasty which gave even people from underprivileged backgrounds the opportunity to show their talent and bring honor and wealth to their families.

The Analects of Confucius is a book based on the teachings of Confucius during his lifetime and was written by his followers after his death. As the title of the book literally means “selected speeches,” the Analects is a compilation of Confucius’s famous and influential sayings. It is believed that the book documents some of the speeches that actually took place between Confucius and his disciples.

The Analects has influenced a great many people in China and is still followed by many today. Confucius’s philosophies were not limited to a single subject. From matters of society to his thoughts on how education could benefit the human race, the Analects covered a wide range of topics including morality and dignity. It talks about following a life of righteousness that will ultimately teach your followers and future generations the same path.

9. A Religious and Secular Figure

Confucius’s philosophies are considered to be religious but, in a way, he also supported secularism. The nature of his teachings shows that he believed in the nobility of nature over religion. He discusses teachings that can be found in various other religions, but the things he advocated most through his teachings were humanism and ethics.

“What you do not wish for yourself, do not do to others.”

This famous quotes from Confucius says a lot about his views on morality, and Confucianism goes back time and again to the issues of values and virtues.

Explorer, philosophical guru, religious mentor and virtuous man; rarely do you see all these qualities in one person. Confucius is not just an integral part of Chinese civilization, he also played a major role in Asian history. He emerged as a role model for many people and this is why Confucianism still being practiced around the world today.