Roman engineering was of the utmost importance in the development of the complex buildings which dominated the Roman era. The many arches and vaults involved in their buildings required a specific type of cement, and the improvement of the general infrastructure (streets, water systems, heating, and so on) involved great feats of engineering. 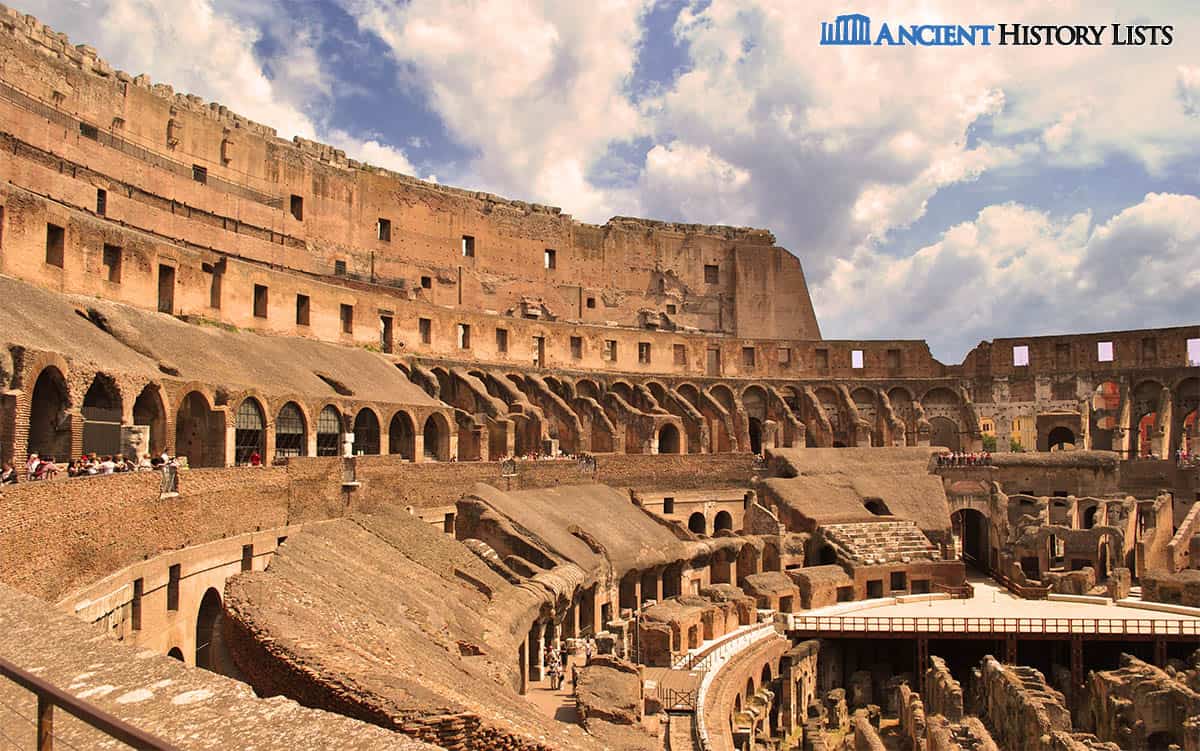 In contrast to Greek structures, Roman public buildings were detached. The assembly room was a semi-circle with seats at the assembly level, and the triumphal curve was a Roman innovation. The Roman baths, most likely adapted from Greek gymnasia, were developed on a phenomenal scale, their style and decoration both lavish and detailed. Many of the Roman houses belonging to rich citizens were grand and were a means of getting away from the cramped conditions and lack of sanitation of the cities.

Working in stone required gifted stonemasons, craftsmen, designers, and builders to complete a project, and the innovations of the Romans called for even more skill and professionalism than the stone building of the Greeks. Examples of these new innovations were door jambs and block-and-tile layers for the rooftops.

Extra craftsmen such as plasterers and painters were required to complete the interiors of the buildings, and artists were employed to create wall murals and mosaic floors. In ancient Rome, the requirement for this assortment of skills brought about the creation of workers’ guilds.

The cement used by the Romans may have simply been made from compressed mud, yet it was most likely created from a mixture of earth and stone. When the Romans discovered that rubble could be reinforced by pouring a fluid mortar over it, the next step was to construct a type of wooden frame that could hold the mortar until it solidified. Making blocks from cement as opposed to cutting them out of stone allowed Roman builders to make progressively more complex shapes and build more and more impressive structures. Even though curves, vaults, and arches were common to other ancient civilizations, it was not until the Romans invented cement that their real architectural worth was understood.

Temples to the gods have always been of vital importance, and these sanctuaries in Greece and Etruria flourished; the first Roman sanctuaries were built more on Etruscan models. The early shrine to Jupiter in Rome, the Capitolium, built in the late sixth century BC, was unquestionably worked in the Etruscan style, but on a fabulous scale. Later Roman temples would also contain the details of this early shrine: the emphasis on a grand entrance, and the large raised platform with a long flight of step leading up to it.

Where possible, Roman towns and cities were based on a system of streets converging at right angles – the sort of design also used for Roman military camps. A central intersection was the focal point of the town where the assembly rooms, main temples, the forum, the baths, and the administrative buildings were found.

The provision of fresh water for cities was of the utmost importance, and ingenious strategies for transporting water to towns were put in place such as the Roman canal.

The requirement for structures dedicated to religion and in honor of the gods led to an extensive assortment of sanctuaries and temples, and tombs for the dead were also carefully planned and integrated into the urban infrastructure.

In the almost 200 years of the Roman Republic, from 200 BC to 27 AD, many types of buildings were created. A standout amongst these, and probably the most well-known structure, was the Roman house.

House façades were not ornate, and usually just comprised a primary entryway and possibly a couple of windows. The floor plan was symmetrical and regular. This basic design could be made increasingly complex depending on the wealth, rank, and position of the owner. The original house could be added to with extra wings and separate structures, gardens, and pools, according to the size of the family and the number of relatives, servants, and slaves who lived there. Houses of the Roman Republic, for example, the Villa of the Papyri at Pompeii from the first century, could be detailed and expensive.

By contrast, in other buildings such as those found in Ostia, there is clear evidence of apartment buildings. These square structures were four or five stories high and are evidence that the Romans were trying to solve the problem of having to house a growing population in a limited space. 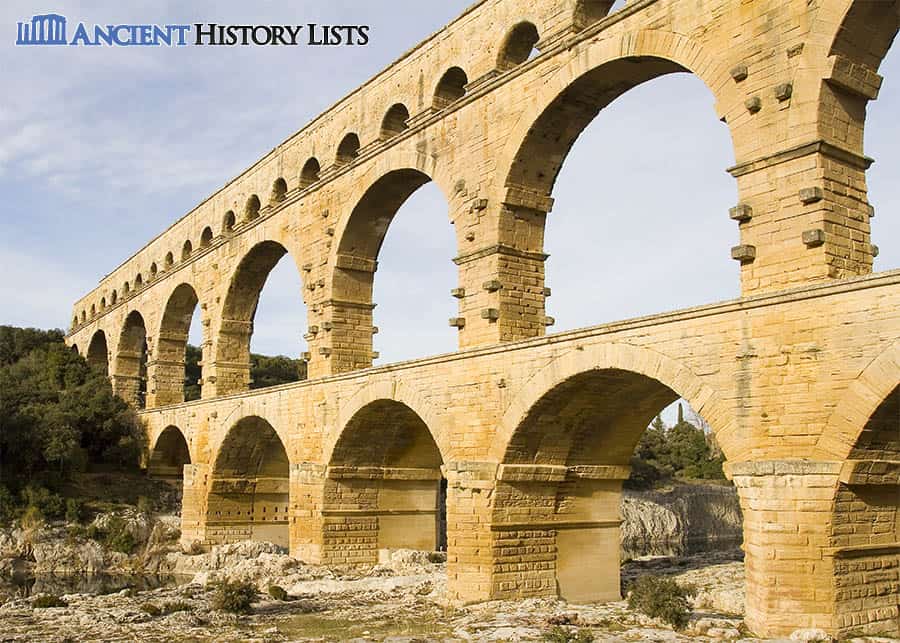 As Rome expanded and towns grew in size, one of the most important considerations was the supply of fresh water. Roman engineers turned out to be particularly proficient at building stone water courses, often many miles long, which brought water from springs high in the hills down to the cities.

Built sometime around 20 and 16 BC, one water system ran for 31 miles. Aqueducts to cross rivers and valleys were outstanding structures and were built to a height of approximately 160 feet.

One ancient source of information on Roman waterways is a work by Sextus Julius Frontinus, a prominent Roman civil engineer, which provides a treatise on the water supply of Rome in the first century. 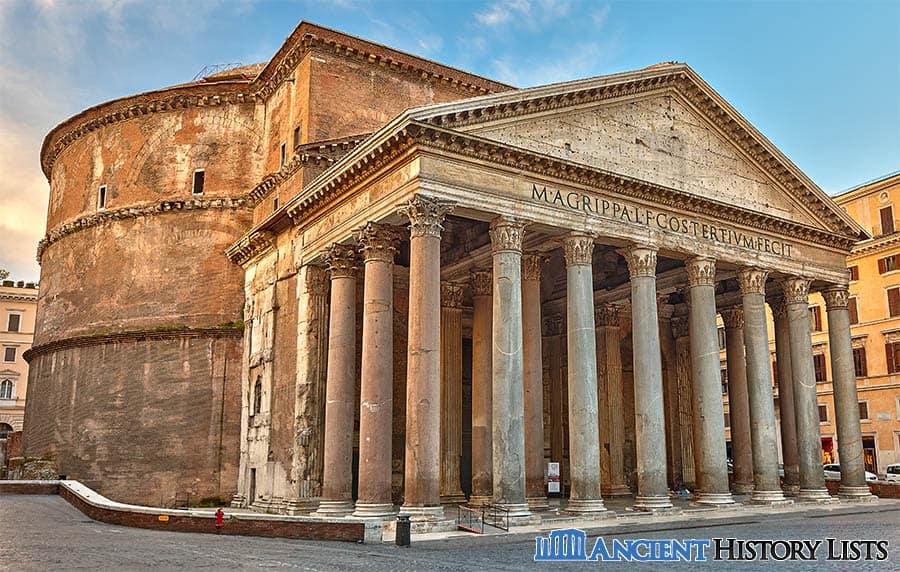 Roman temples were based on Etruscan models, and this can be seen in the Temple of Fortuna Virilis on the Tiber in Rome. The pillars on the sides of the cella (the inner chamber) are not unsupported but instead are “locked in” – they seem to extend from the wall and are part of it. This use of connected pillars is a trademark that can be seen in numerous Roman temples.

The Maison Carrée at Nîmes is a prime example of temple engineering from the reign of Augustus in the late first century BC. It is bigger than the Temple of Fortuna Virilis, with six pillars at the front and back and eleven on the side, eight of which are locked in. The tops are in an intricate Corinthian style: fluted sections with flared tops.

Close to the Temple of Fortuna Virilis in Rome is another sanctuary, the Pantheon, which is substantially more Greek in nature. The platform extends all around the building, not just at the front, and is flanked by 20 Corinthian pillars. This structure is hard to date, yet it shows the way that temples in the Greek style could coexist with those of a more progressive Italian style. The name “Pantheon” suggests that this structure was dedicated to all of the gods. It has been so well preserved because it was converted into a Christian church in the seventh century.

The Pantheon is unusual because it is rectangular in shape with a circular interior. A significant part of the structure can be dated to the reign of Hadrian in the early second century AD, but there has been some debate over the dating of the whole structure. The integrity of the principal part of the structure depends on an intricate arrangement of arches within the walls to help distribute the weight of the ceiling vertically. The builders and designers of the Pantheon collaborated to create an outstandingly beautiful structure from the Roman era. 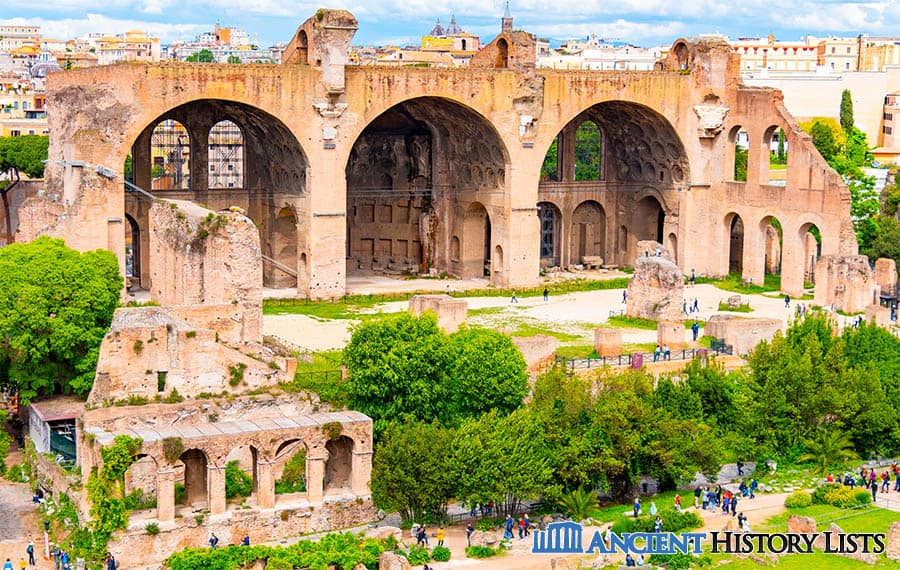 These buildings were created as places for the public to gather. The basilicas were vast, open, communal spaces for administrative purposes or designed to be used as meeting places. The Roman baths were equally breathtaking, complex structures and were built on a vast scale.

The Basilica of Maxentius in Rome, built in the fourth century AD, is a perfect example of the scale and multifaceted nature of Roman communal buildings. The Baths of Caracalla show how no expense was spared by the Romans in the building of public spaces, which were also used to showcase a ruler’s power and wealth. The extensive baths at Caracalla can be compared to many great modern-day structures such as train stations and libraries. 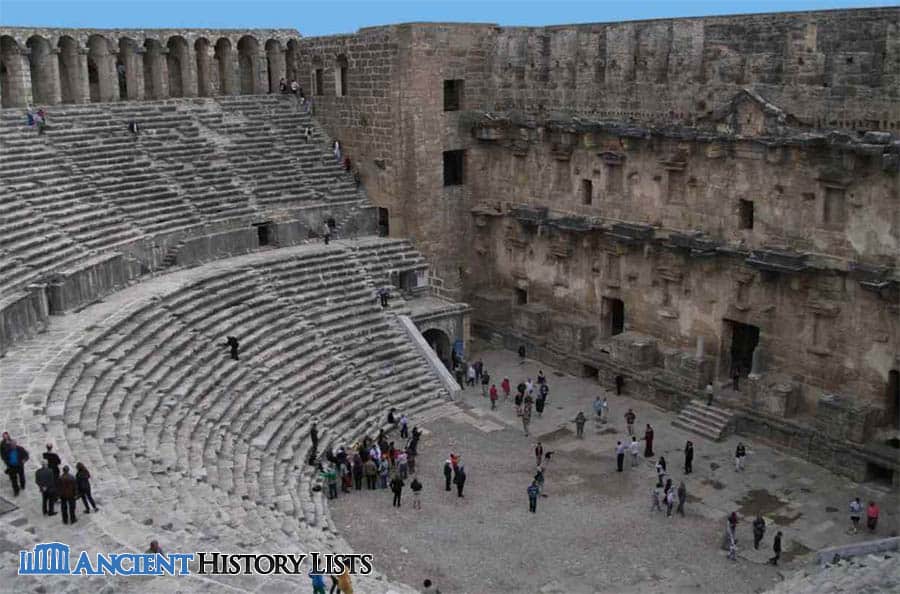 The Roman auditorium was based on the Greek model. Although the Greek and Roman arenas give the impression of being fundamentally the same in that they were places for great spectacles and large audiences, they differed in one significant way. The Greek arenas were semi-circular while the Roman amphitheaters were oval.

The auditorium at Aspendus in Asia Minor (present-day Turkey), built in the second century AD, is a prime example of a Roman arena. The main building is more than 300 feet wide, and the stage is over 20 feet down. It is thought that this structure could accommodate in excess of 7,000 spectators.

These vast structures confirm the importance of theaters and arenas in Roman life, and in many ways, the amphitheaters used for gladiatorial contests and other sporting events were just as important. This can be seen in the Colosseum, which was started by Emperor Vespasian and finished by his children, Titus and Domitian, somewhere between 70 and 80 AD.