The Persian civilization can be considered one of the most scientific civilizations of the ancient world because of its many inventions. Now present-day Iran, Persia can be credited with such inventions as the refrigerator, the battery, and sulfuric acid, all of which were very advanced for the period. These inventions were simple and made use of the available resources in the region. The potential of these discoveries may not have been fully understood in ancient Persia as they are still evolving in the modern world. Nonetheless, it shows how advanced this civilization was. Here are the top 10 inventions of the Persian civilization: 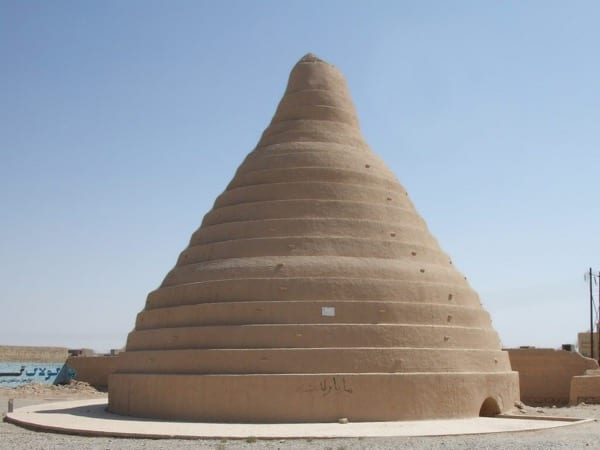 The yakhchal is an ancient evaporation cooler which has a two-fold meaning: yakh means “ice” and chal means “pit.” These ancient refrigerators were mainly built and used in Persia. The Persians had mastered the technique of building and using the yakhchal by 400 BC. The structure above the ground was dome-shaped and had a subterranean storage space. Using thick, heat-resistant construction materials, the subterranean storage space was insulated year-round. The underground spaces were up to 5,000 cubic meters in volume. Many of these structures were built hundreds of years ago and are still standing.

Cold air entered the structure through the base and subterranean space. The conical shape of the structure allowed the remaining heat to flow up and out which caused the inside of the structure to remain cooler than the outside environment. They were built from a unique water-resistant mortar called sarooj. The mortar was composed of sand, clay, egg whites, goat’s hair, and ash in certain proportions to make it resistant to heat transfer and water. The walls at the base of the structures were at least two meters thick and the main function of the structures was to store ice, but it was also used to store food. Ice was created in the winter and stored in the yakhchal for the summer.

A ceramic pot, a metal tube, and a rod of a different metal were used to create the Baghdad Battery or Parthian Battery. The artifacts were found in Mahoze, or modern-day Khujut Rabu. The battery was tested by Western scientists who found that when the battery jar was filled with vinegar (or another electrolyte), it generated a current of 1.5 to 2.0 volts.

Wilhelm Konig, assistant at the National Museum of Iraq in the 1930s, authored a paper which proposed that the artifacts may have formed galvanic cells used for electroplating gold onto silver objects. This hypothesis has since been rejected and the true purpose of the artifacts remains unclear. If the artifacts were used as batteries in Persia, this would predate the discovery of the battery by Count Alessandro Volta by more than 1,600 years. 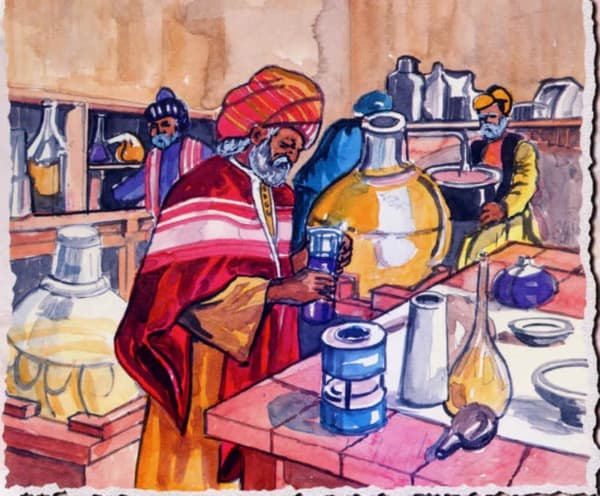 Sulfuric acid is one of the most famous Persian discoveries. Abu Bakr Muhammad Ibn Jakarta al-Razi, a Persian astronomer, mathematician, and geographer, was the first to discover sulphuric acid. It was not just an important discovery back then, but also formed the basis for chemical engineering in the modern field of chemistry.

Sulfuric acid today is used to make many substances from fertilizers to detergents and has impacted everything from agriculture to our domestic lives. A nation’s industrial strength can also be gauged by the amount of sulfuric acid that it produces. 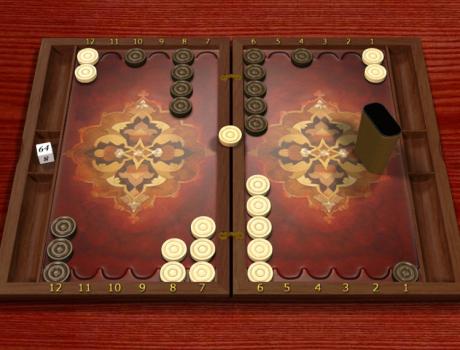 Backgammon, a popular modern game, was first invented in Iran in about 3000 BC. It is one of the oldest surviving board games. In the modern world, it is played with two players and the playing pieces are moved according to the roll of the dice. A player wins if he/she is able to remove all of their pieces from the board before their opponent.

“Senet” was a similar type of game invented by the ancient Egyptians, but the Persians are still widely known as the inventors of backgammon. Excavations at Shahr-e Sukhteh in Iran found a board game with two dice and 60 checkers. The popularity of backgammon has survived thousands of years in the region as Iranians can still be found playing the game in public parks and cafes all over the country. The game is today known as “nard” and has different initial positions and objectives to the ancient game.

During the middle of the sixth century BC, the Persian Empire of the Achaemenid dynasty rose to supremacy and spread across Mesopotamia and Afghanistan. The Old Persian language developed during the early history of this dynasty, and it is not a direct offshoot of the Sumerian and Akkadian systems. While the physical appearance of Old Persian symbols is cuneiform (in the shape of wedges), the actual shapes of the signs do not correspond to signs in the older system using similar phonetic values.

Some logograms were also part of the Old Persian syllabary, making it something of a misnomer. Old Persian is classified as a syllabic script and is also a very skeletal syllabary with sounds like /pu/ not having independent signs, instead being written using the signs pa and u. Texts written in this form have been found in Persepolis, Susa, Hamadan, Armenia, Romania, and Kharg Island along the Suez Canal. These inscriptions date back to the period of Darius I and his son Xerxes I. Later on, a more recent form of the language known as pre-Middle Persian was used. 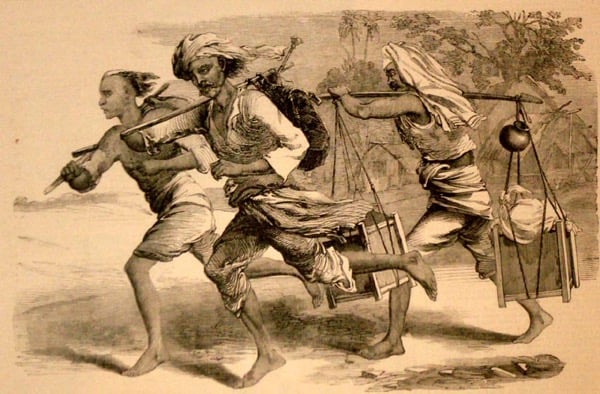 There is reliable evidence that the first regular postal system in the world began in ancient Iran. Riders and horse-drawn wagons carried mail that consisted mostly of governmental dispatches from one place to another. According to the Greek historian Herodotus, the regular postal service began in ancient Iran in the sixth century BC during the reign of the first King of Achaemenid, Cyrus the Great. The postal system was swift, with men and horses waiting along the road at intervals during the day-long journey and not stopping for anything: snow, rain, or heat.

4. The Concept of Human Rights 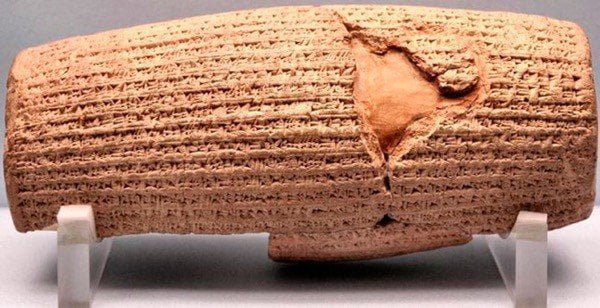 The concept of human rights is a burning issue in the present day. While it may seem like a new development, the idea of human rights has its roots in ancient Persia. The armies of Cyrus the Great, the first king of ancient Persia, conquered the city of Babylon in 539 BC. Cyrus freed the slaves and gave people the right to choose their own religion by establishing racial equality. This declaration was recorded in a baked clay cylinder known as the Cyrus Cylinder. It was written in the Akkadian language with cuneiform script.

The Cyrus Cylinder was discovered among the ruins of Babylon in Mesopotamia in 1879 and is currently at the British Museum. This declaration has been translated into all six official languages of the United Nations and its provisions parallel the first four articles of the Universal Declaration of Human Rights. It has been dubbed as the first declaration of human rights which has been supported by Shah Mohammed Reza Pahlavi, in a 1967 book, The White Revolution of Iran.

Modern animation has taken a great leap forward but its history dates back to the Bronze Age in Persia. An earthenware goblet discovered in the Burnt City in the Sistan and Baluchestan province is believed to be 5,200 years old. The goblet depicts a series of drawings of a goat jumping towards a tree and eating its leaves. Sequential pictures similar to the one on the goblet can be found throughout medieval Islamic Persia.

Discovered by Italian archaeologists from a burial site, the special relationship between the images was not immediately noticed. This relationship was discovered years later by Iranian archaeologist Dr Mansur Sadjadi. Researchers have been at odds ever since over the significance of the artwork on the bowl. It was believed to depict the goat eating from the Assyrian Tree of Life, but archaeologists now believe that the goblet predates the Assyrian civilization by 1,000 years. 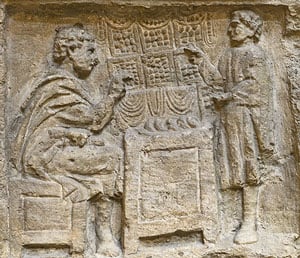 The taxation system can be traced back to ancient Persian. It was an important component of the Achaemenid state administration and was known as Achaemenid Taxation. In the Persian Empire under Cyrus II and Cambyses, subjects were mostly obliged to deliver only gifts, and regular taxes were first introduced under the rule of Darius I (r. 522-486 BC). While the system of state taxation already existed under Cyrus II, it was not regulated and people who did not pay taxes had to deliver gifts and vice versa.

While Persians, as the ruling people, were exempt from monetary taxes, they were not exempt from taxes in kind. Information on the collection of the taxes in southwestern Iran during the reign of Darius I has been found in the Elamite Fortification document. Some of the records show receipts for small livestock being paid as state taxes. Approximately 7,740 Babylonian talents of silver (about 232,200kg) were paid by the people to the Achaemenid rulers each year excluding the Indian satrapy which paid its contribution in the form of gold dust. 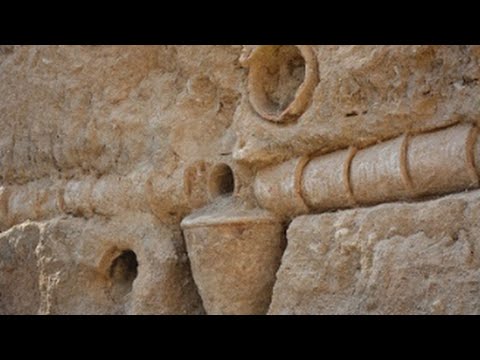 A qanat is a gently sloping underground channel that carries water from an aquifer or water well to houses and fields. It is used for the irrigation of crops and for drinking water. It is an old system of supplying water from deep wells via a series of vertical access shafts. It is still a reliable means of supplying water to human settlements and for irrigation in hot, arid and semi-arid climates. It was first developed by the Persian people in Iran around the first millennium BC. It slowly spread westwards and eastwards from there.

The qanat tunnels, which could be several kilometers long, were hand-dug and the same size as the person digging the tunnel. The vertical shafts, sunk at intervals of about 20 to 30 meters, were used to remove excavated materials and also acted as ventilation and access for repairs. Main qanat tunnels sloped down from pre-mountainous alluvial fans to an outlet in villages. From there the canals distributed water to fields for irrigation. These structures were built with great scientific vision and allowed Persian farmers to survive during long dry periods without surface water. These qanats are still used in many places in China, Morocco, and America.

All these discoveries have both utilitarian and intellectual value and show that the Persian civilization was one of the most advanced civilizations in the history of the world. The development of abstract concepts like human rights and taxation has emerged from this civilization which is still highly valued and studied.