The ancient Greek period lasted for about a thousand years and ended with the advent of Christianity. It is considered by certain historians to be the first Western civilization. Greek culture had an amazing impact on the Roman Empire, which allowed it to be adapted and brought to the rest of Europe. The ancient Greeks had a huge influence on language, legislature, education, reasoning, science, and culture which led first to the Renaissance in Western Europe and then later to various neo-Classical revivals in 18th and 19th century Europe and the Americas. Here is a list of the top 12 fascinating facts about ancient Greece:

It is widely accepted that Athens was the birthplace of a vote-based system of government, and despite several hypotheses to the contrary, Athens remains the inspiration for later democracies.
Ancient Greece had a complex system of government as each of its urban communities had its own way of ruling, and the idea of rule by majority was born over a period of time in response to a series of localized political and social issues. Prior to democracy, there was a great deal of social inequality, and out of a need to address elitism and lack of opportunity for the lower classes, the vote-based belief system was born.

This is a truly bizarre statement, but the Greeks have called their nation Hellas or Hellada for a long time, with its official name being the Hellenic Republic. The English word “Greece” comes from the word Graecia, which is Latin for “the land of the Greeks.”

3. The Olympics Originated in Greece

Greece is well known as the birthplace of the modern Olympics, and historians believe that the first-ever Greek Olympics was held as a religious celebration in 776 BC in honor of the mighty god, Zeus.
However, the sporting events then were very different from those we see today. Two very popular events were the exciting but dangerous chariot race and an ancient sport known as pankration which was a mixture of wrestling and boxing. Boxing itself was a separate event and was not divided into weight categories. You could also view ancient Greece as the first place to host highly competitive events like modern-day mixed martial arts contests.

One final point of interest is that, for the most part, the ancient Greeks competed in the nude or wearing just a thong. 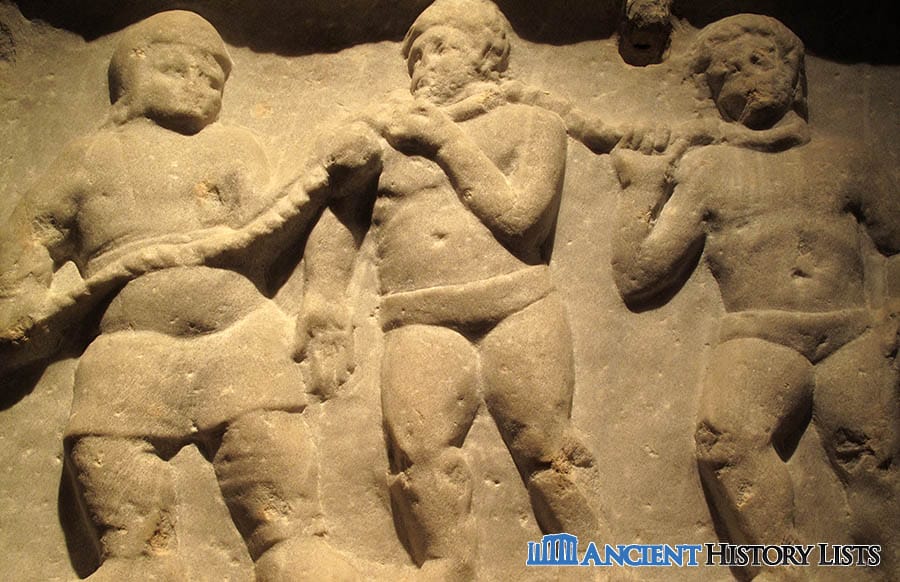 Somewhere in the region of 40 to 80 percent of the population of Classical Athens were slaves, and historians believe that over the entire region, the ratio of slaves to the rest of the population could have been approximately 2:5. Slaves were common in all households and most Greek families owned at least one slave. Other slaves such as the “helots” were state-owned.

At its economical height in the fifth and fourth centuries BC, ancient Greece was the most developed economy in the world. This can be seen from the average daily Greek wage which was around 12kg of wheat. During the Roman era, the average pay for an Egyptian laborer was about 3.75kg.

The Greek statesman Pericles used taxes and contributions from the wealthy to boost the Athenian state. An example of this is the magnificent Parthenon, built to pay tribute to the goddess Athena at the Acropolis.

Pericles also paid for annual plays such as comedies and tragedies to be staged at the Acropolis. These plays embodied the social and cultural accomplishments of the ancient Greeks while the Parthenon showed how advanced their architecture had become.

Through the narratives of Herodotus and Thucydides, and the medical insights of Hippocrates, the ancient Greeks showed a great aptitude for rational thinking, philosophy, and public speaking.

The great architecture of the ancient Greeks bears testament to their advanced craftmanship and building techniques and is woven into the fabric of their daily and political life.

The Greeks moved southwards into the Balkan promontory in waves, starting in the late third millennium BC, the last being the Dorian invasion. The proto-Greek language is accepted to date to sometime between the 23rd and 17th centuries BC. The period from 1600 BC to around 1100 BC is known as Mycenaean Greece, famous for the rule of King Agamemnon and the wars against Troy, as described in the sagas of Homer.
The period from 1100 BC to the eighth century BC is a “dark age” from which no essential writings survive and only meager archeological proof remains. Third-hand accounts, for example, Herodotus’ Histories, Pausanias’ Description of Greece, Diodorus’ Bibliotheca, and Jerome’s Chronicon contain references to this period and document some of the rulers from this time. The history of ancient Greece is commonly believed to have finished with the rule of Alexander the Great who died in 323 BC.

The history of ancient Greece relies heavily on contemporary sources. The Greek historians and political journalists whose works have endured, most notably Herodotus, Thucydides, Xenophon, Demosthenes, Plato, and Aristotle, were for the most part Athenians. That is why many of these accounts focus on the history and legislative issues of Athens over other cities. They offer little insight into the everyday life of communities and contain barely any social history; their focus is completely on political, military and strategic issues.

For the most part, education was a private affair and most well-off families could afford a private tutor. However, during the Hellenistic period, some city-states set up government-funded schools. Young men were taught how to write, sing, and play one melodic instrument and were prepared for a life of military administration. Many of them were upper-class citizens and did not need to work. Young ladies were taught how to write and do basic math to help them with running a household.

Few young men continued their education into adulthood, with the exception of the Spartans who underwent extensive military training. Most young men had a mentor and learned by watching him debate legal issues in the marketplace, helping him with his public duties, practicing with him in the recreation center, and going to symposia with him. Some students went on to train in colleges in the cities such as the Lyceum and the Academy, where they were under the tutelage of the most noteworthy instructors.

In ancient Greece, an “idiot” was anyone who didn’t participate in political or public arenas. Their opposite was the “polites” who were considered worthy public citizens.
“Idiot” (Ιδιωτης) comes from the word idios, meaning “self” or a selfish person who ignores political debate, does not take part in decision making and generally does not participate in politics. As the word implies, it was someone who only cared for himself, “separated from the whole.”

In ancient Greece, politics was a serious business, and determining the way in which the city-state would rule was of utmost importance for everyone. This was especially true in democratic Athens where every citizen had the right to state their opinion publicly, and indeed were obliged to do so. Any man had the right for his opinion to be heard by his peers and respectfully debated.

Being an idiot, therefore, was considered a serious flaw. Idiots were thought to be weak-minded individuals who let others control their lives, and with time the word has evolved to become a common insult.

11. No Wars Before the Olympic Games 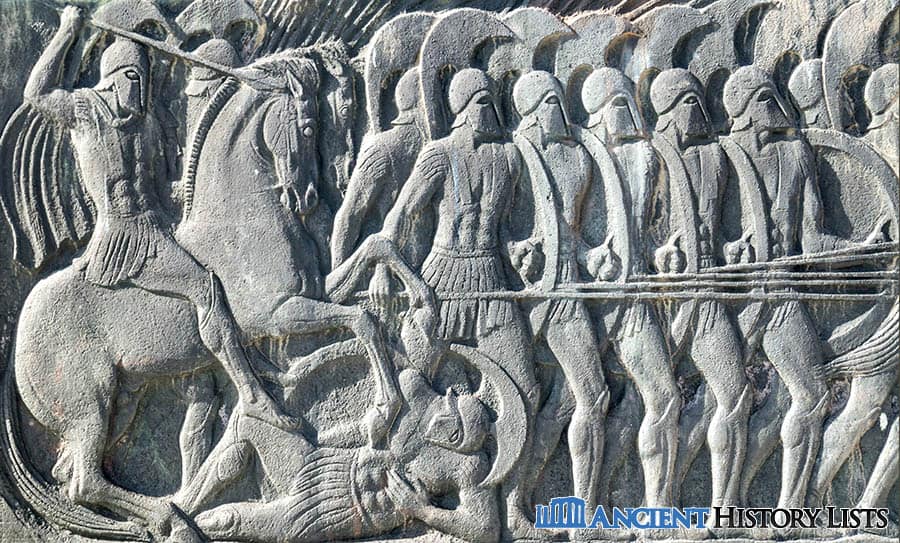 In the month before the ancient Olympic Games took place, no fighting was permitted, allowing spectators to travel across Greece safely to get to the games. To encourage this, and in deference to the religious significance of the games, a ceasefire or ekecheiria was put in place all over Greece.

At first, the ceasefire was for one month but over hundreds of years, it was extended to three. No wars were allowed, no arms could be carried in the region of Elis, and no obstruction was to be put in the way of spectators, competitors or “theories,” the officials who had to travel from their homes to the games. Envoys or spondophoroi were sent from Elis to publicize the games all over Greece, and spectators came from mainland Greece as well as the islands, Ionia and Magna Graecia.

In Athens, the populace was separated into four social classes depending on wealth, and individuals could move up a class only if they attained more money.
In Sparta, all male natives were called homoioi, meaning “peers” but Spartan lords, who acted as the city-state’s military and religious leaders, originated from just two families. Only free, land-owning, locally born men qualified for full assurance under the law in a city-state. In most city-states, unlike in Rome, high social ranking did not give a man extra rights.

The ancient Greeks were pioneers in human progress, creating many systems and traditions without the use of cutting-edge technology to help them. Ancient Greece also has many fascinating facts relating to culture, sports, food, etc.