Cleopatra was born in 70 or 69 BC and was the oldest daughter of Pharaoh Ptolemy XII (Auletes) of Egypt. Her mother is believed to be Cleopatra V Tryphaena, Ptolemy XII’s wife and probably his stepsister. As a member of the Ptolemaic line, she was related to its founder, Ptolemy I Soter, a Macedonian Greek general and friend of Alexander the Great.

Cleopatra had a memorable life in which she married both her siblings and then battled against them for royal supremacy. She had a liaison with the Roman ruler Julius Caesar, and after his death, with his companion, the Roman general Mark Antony. She eventually committed suicide. Cleopatra is a magnificent, acclaimed figure in history and there are many different legends connected to her. She was the last dynamic leader of the Ptolemaic Kingdom of Egypt and also a maritime pioneer, linguist and healer.

No contemporary records exist of Cleopatra’s life, so the majority of her story has been learnt through historians like Plutarch (46 AD–120 AD) and Dio Cassius (155 AD–235 AD).

The following 10 fascinating facts about Cleopatra will shed light on the family, life, rule, connections, and death of this celebrated Egyptian queen:

1. She was an intellectual 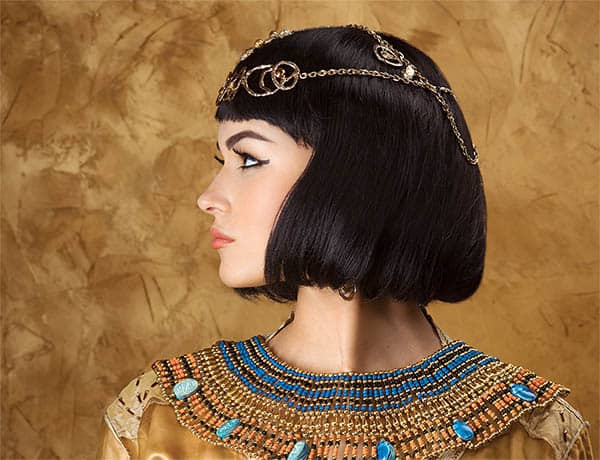 Her native language was Koine Greek and she was the first Ptolemaic ruler to become familiar with the Egyptian language. Cleopatra was well educated and studied math, logic, debating, and science. She spoke no less than nine languages, and possibly upwards of 12. Because of this, she was able to address commanders and leaders of different nations without a translator or mediator which gave her an advantage. Cleopatra was an author. She wrote a medicinal and pharmacological book called Cosmetics which included, amongst other things, remedies for male pattern baldness and dandruff.

2. She murdered her siblings

In Egypt and in royal families especially, murder plots were as common as marriage, and Cleopatra and her siblings were no exception. After becoming the pharaoh queen in 51 BC, Cleopatra set out to augment her power by seducing the Roman general Caesar on his visit to Alexandria in 48 BC, thus further increasing the tension between herself and her brother Ptolemy XIII. She began to fight Ptolemy for royal control. With their youngest sister Arsinoe IV, Ptolemy ordered the royal residence at Alexandria to be searched and Cleopatra was caught inside with Caesar.

In 47 BC Caesar’s troops landed in Egypt and he claimed victory in the ensuing Battle of the Nile. After his defeat, Ptolemy drowned in the Nile and Arsinoe was exiled to the Temple of Artemis at Ephesus. A few years later in 41 BC, Cleopatra had Arsinoe murdered with the help of her lover, Mark Antony.

Ptolemy XIV was Cleopatra’s youngest sibling and was made pharaoh in 47 BC after the passing of Ptolemy XIII. Despite being married to him as well, Cleopatra was still involved with Caesar. It was maybe the death of Caesar in 44 BC in Rome that hastened Ptolemy XIV’s death, possibly by poisoning, at the hands of Cleopatra herself. Ptolemy XIV was replaced by Ptolemy XV Caesar, more commonly called Caesarion, who was Cleopatra’s lovechild with Caesar. With her newborn child as co-ruler, Cleopatra’s position in Egypt was more secure than ever and she expected Caesarion to go on to succeed her.

3. She had an affair with Julius Caesar 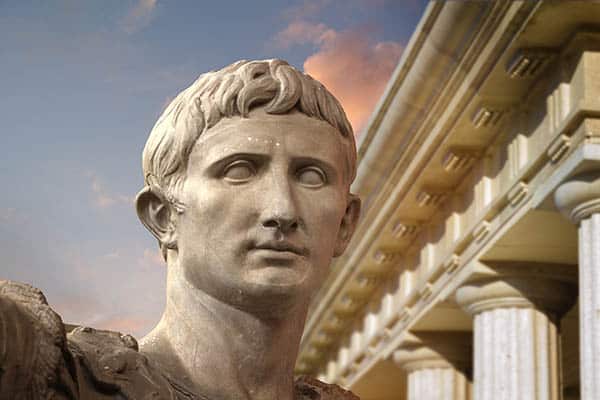 In 48 BC, after the murder of his political adversary Pompey, Julius Caesar arrived in Alexandria seeking reimbursement for the debts of Auletes. Ptolemy XIII, who had ordered Pompey’s execution, would have relished support from Caesar, yet Caesar was incensed at him for the murder of a Roman emissary. Cleopatra seized this opportunity to recapture full control of Egypt from her sibling. Historian Cassius Dio records how Cleopatra secretly captivated Caesar with her beauty and intelligence. The historian Plutarch further embellishes the story, claiming that she had herself carried into the royal residence to meet Caesar tied in a bed sack. Whatever the truth, the outcome was that Cleopatra and Caesar established a liaison which propelled her to power in Egypt and kept her there until the death of Caesar in 44 BC. Cleopatra had a child in 47 BC called Ptolemy XV Caesar, who is generally accepted to be Julius Caesar’s son.

4. There’s proof that Cleopatra wasn’t as physically striking as once believed

Coins with her image on them show her to be rather masculine looking with a large nose, however, a few historians point out that this was probably done deliberately to make herself look stronger. Plutarch asserted that Cleopatra’s excellence was “not through and through unique,” and that it was rather her enchanting voice and “general appeal” that made her so alluring. The Romans painted Cleopatra as a political seductress with an appetite for food, wine, and sex, but this could be a misrepresentation.

5. She was married to both of her brothers

Marriage between brother and sister and father and daughter was a long-held practice in the Egyptian royal family. This was probably in imitation of the gods like Osiris and Isis, as the pharaohs were viewed as having god-like status with the responsibility to continue this assumed divinity down through the generations.

Despite being frowned upon by the Greeks, this practice was adopted by the Ptolemaic line in the marriage between Ptolemy II and his sister Arsinoe II, two or three centuries before Cleopatra VII. Similarly, after the death of her father in 51 BC, when Cleopatra came to power alongside her younger sibling Ptolemy XIII, they married each other.

The arrangement was unsuccessful, however, as they hated each other. Ptolemy XIII eventually drowned in the Nile after losing the Battle of the Nile in 47 BC, while the Roman general Julius Caesar began a liaison with Cleopatra and set her back on the throne, this time with another of her siblings, Ptolemy XIV, who was 12 or 13 years old. The young pharaoh and Cleopatra were married, yet Cleopatra remained Julius Caesar’s lover and held the balance of power.

6. People believed that she was the embodiment of the goddess Isis 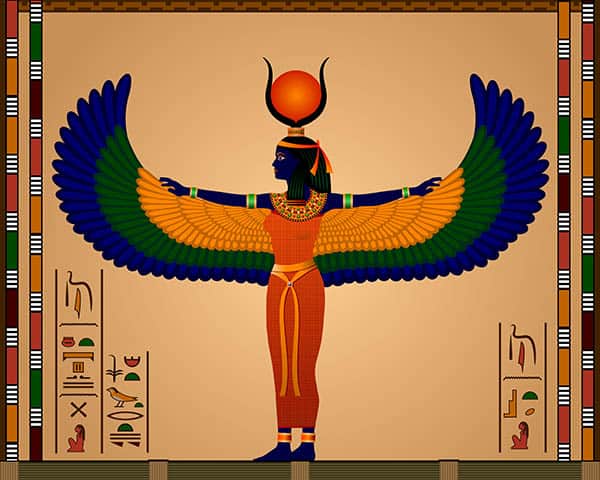 Isis was an important ancient Egypt goddess and was regarded as both the divine mother and the sentinel of the dead: a guide from belly to tomb. Isis was married to Osiris, her relation and the divine force of the afterlife. Both gods were revered Egyptian divinities in the first century BC, Isis being the assimilation of numerous different goddesses. Cleopatra VII styled herself as the incipient Isis, possibly out of a reverence for her or for political reasons. She dressed and behaved like a goddess, and pointed to ancient prophecies to justify her behavior.

7. Cleopatra was not a native Egyptian

Although born in Egypt, Cleopatra can trace her family roots to Macedonian, Greece, and Ptolemy I Soter. Ptolemy took over the reign of Egypt after Alexander’s death in 323 BC, starting a family line of Greek-speaking rulers that went on for about three centuries. Despite not being ethnically Egyptian, Cleopatra adopted many of the nation’s old traditions and was the first member of the Ptolemaic dynasty to learn the Egyptian language.

8. Cleopatra dressed up as Aphrodite for Mark Antony

Roman General Mark Antony styled himself on Bacchus, the god of wine and celebrating, so Cleopatra dressed as Aphrodite, the goddess of love, who is believed to have had extramarital relations with Bacchus. She sailed down the Nile on a brilliant barge with a purple sail being fanned by servants dressed as Cupid. Cleopatra began her astonishing relationship with Mark Antony in 41 BC. Their relationship also had a political angle, as Cleopatra required Antony to secure her crown and maintain Egypt’s autonomy, while Antony wanted access to Egypt’s wealth and assets. The arrangement worked well for both of them.

Ancient sources state that they spent the winter of 41 to 40 BC indulging in pleasure and even formed their own drinking club called “Inimitable Livers.” Members of this club spent their time eating, drinking, having fun, and setting each other challenges.

9. She used stagecraft and theatrics to impress people

Cleopatra believed herself to be a living goddess, and she used careful stagecraft to ensnare potential lovers and strengthen her position. This was clearly seen in 48 BC when Julius Caesar arrived in Alexandria during Cleopatra’s conflict with her sibling, Ptolemy XIII. Caesar was captivated by the youthful ruler in her imperial attire, and the two soon became lovers. She knew very well how to use this skill to impress people and often used it to get her own way.

10. Her cause of death remains unknown

There have been many controversies regarding Cleopatra’s death by suicide. Legend has it that she killed herself by using an asp – probably an Egyptian cobra – to bite her, yet the writer Plutarch concedes that “what truly occurred is known to nobody.” He says Cleopatra was also known to conceal poison in one of her hairbrushes, and the Greek historian Strabo notes that she may have suffered “a deadly treatment.” Research suggests that she probably did die from some sort of poison, but nothing has been proven.